I’ve been wanting to visit this place for a long time, but the lack of company and/or an occasion kept me from it. It was one of my friend’s birthday last weekend, and I dragged everyone to Hard Rock Cafe. I was kinda skeptical if whether these guys would like the place, but thankfully, they did. The place was partly full when we dropped in around 8:30, but got packed as time passed by. We found a booth in the restaurant part of the cafe (the other being the bar section). The ambience and décor were very good, and it felt like I was in a real American cafe. The loud blaring music made sure no one was dozing. 😛

We took our time with the menu, and decided to start with a Veg Jumbo Combo, which included Santa Fe Spring Rolls, Onion Rings, Potato Skins and Tomato Bruschetta with four different sauces. The meat-eating friends ordered for Tupelo Chicken Tenders. We also ordered a drink each, and I asked for a Mango Cooler. 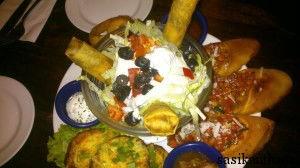 The drinks were served first, and I liked mine. It was a mix of Mango and Orange juices. Soon, the Jumbo Combo was served, and it was huge and every well presented. The Santa Fe Spring Rolls were heavenly and one of the best rolls I’ve had in recent times. Cheesy and crispy, they were yum. The Onions rings were alright, a little too oily, and the Bruschetta was pretty decent. The Potato Skins again were excellent. They were cheesy and perfectly baked. I’m not a big fan of salads, but the accompanying one tasted delicious.

For the main course, I ordered a HRC Veggie Burger with caramelized onions and mushrooms. Other guys ordered for Caribbean Black Bean Burger, Grilled Fillet Steak and Grilled Chicken With Lemon Caper Sauce. 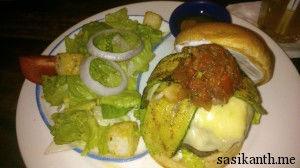 It took a while for the main course to be served, probably because of the steak. When the food finally arrived, it was quite a sight. My burger looked super huge, and I was in for an absolute treat. It turned out to be scrumptious. I struggled to take it all in into my mouth and kinda made a mess of it before I finished, but it was worth all the mess. I only wish they went light on the caramelized onions, for it made it a little too sweet.

I had a taste of the  Black Bean Burger, and it tasted pretty good as well. Unlike mine, which was served with a salad, this one came with crunchy Fries. The other guys were happy with their Chicken and Steak as well. I happened to taste the Mashed Potato which came with the steak, and it was again, heavenly. It was definitely the best Mashed Potato I’ve had in my life. Wow!!

We were pretty much stuffed, but I wanted to try their Chocolate Mousse. But the guy suggested we go for Chocolate Cake instead, which could be shared. 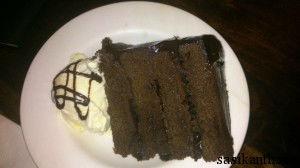 And the cake turned out to be luscious, moist and fudgy. It tasted even better with the Vanilla ice-cream. Yummy!!

Overall, an excellent meal. The food was finger licking good, and so was the atmosphere. I loved the music they played, the ambience, and their service. The only thing I didn’t like was the amount on the bill :P. It was expected to be an expensive affair, but to be honest, it was worth it. It was a perfect way to celebrate my friend’s birthday. I’m definitely going back soon to get another taste of their Spring Rolls and Burger!!