Hello Curry, a takeaway joint which became prominent not exactly because of its food, but its packing. I called them a couple of times in the past, but they don’t deliver beyond Hitech City area, so. I was passing by Ayyappa Society the other day, and decided to pick something up instead. The place was really difficult to find for they don’t have any board or anything; it’s a small shed right behind Wingster. It seemed like they were actually surprised to see a customer walk in.

I was handed a paper menu, and I ordered a small portion of Paneer Makhni. I had to stand there in the sun for about 10 minutes before I was handed a bag with a really tiny box for which I paid 100 bucks (it was 93, but the guy at the store didn’t have change). 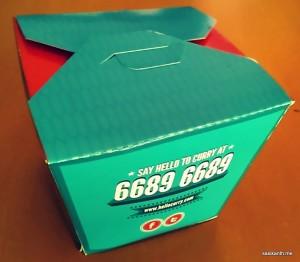 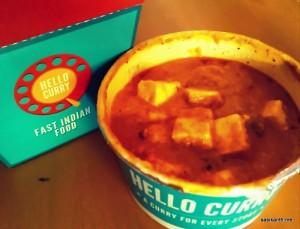 Ok, the box did look good, and on opening it, I found a small sealed cup. You have to agree that the packing was in fact worth the buzz. However, on taste front, I wasn’t really happy. The paneer was fresh and really soft, but the makhni gravy turned out to be very bland for it lacked salt and had no flavour.

When I was handed out a really tiny box, I started to feel like it was a bad decision spending so much for such box. But the quantity wasn’t so bad after all. However, the taste wasn’t great, and that’s what finally matters. You might have the best packing in town, but that’s not what I am gonna eat. And also, it would be nice to offer a customer at least a seat to sit in when he comes to order, or have a policy not to accept in-store orders.

Overall, it was a mediocre experience.