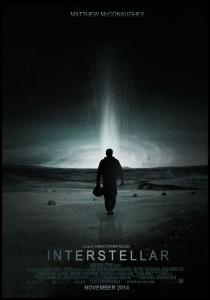 Christopher Nolan you beauty! Where do you get your ideas from, seriously? While everyone else is stuck making movies on Earth, Moon or about Aliens, this guy actually has the audacity to picture interstellar travel. Man, take a bow!

If Inception was beyond your reach, wait till you watch this one. In the distant future, where Earth is almost dead, our protagonist leads a mission to find a habitable planet beyond the Solar System while leaving his young kids behind. Whether he is able to save his family and the human race from extinction is the million dollar question. Scripted and directed by Nolan, the movie is pretty complicated for there’s science and fiction amalgamated together. It starts of terribly slow and it’s not until the first landing that it gets interesting. Nevertheless, Nolan succeeds in setting up a larger than life epic with some intense drama. Direction is absolutely spot on and screenplay is perfect, if only he had a stronger script. The run time could have been trimmed, but again, you’re talking about 100 years in less than 3 hours. From Memento to Interstellar, Christopher Nolan has come a long way, challenging himself with every film and setting the bar higher. What next?

If you thought this movie is all about Nolan, you’re mistaken. Matthew McConaughey is exceptional in the lead role and carries the entire movie on his shoulders. His performance in the scene where he watches his kids messages is outstanding. Anne Hathaway is decent. Jessica Chastain is pretty good, and so is Matt Damon in his brief appearance.

Music by Hans Zimmer is excellent. His score in the scene where the spaceship docks with Endurance is remarkable. Editing by Lee Smith is neat. However, few of the initial scenes could have been trimmed. Cinematography by Hoyte van Hoytema is again, beyond praise. The IMAX visuals were magnificent (and I wouldn’t mind watching movie again just for the visuals). Technically, the movie is a treat!

Is it worth your time and money??: Interstellar is not your regular weekend stress-buster movie. It’s one which makes you rattle your brain to make sense (and it still might not). While not a perfect movie on script front, its sheer magnificence makes it a must watch for any movie lover. Add to that some great acting and music, and you have a winner.

Do stay away if you don’t like intense movies which require a lot of thinking and understanding!

Worth mention: Sheer grandeur of the movie. The IMAX scenes were out-of-the-world good!