Jivas (I know it’s just Jiva, but I prefer to call it Jivas) has been one of my favorite restaurants in Hyderabad for they serve awesome vegetarian food for a reasonable price. So when they moved to a different location with a change in name, I was really excited to try it out. One night, thanks to my friends, I finally got that opportunity.

The new place was much brighter with white interiors. While I liked the cozy interiors of the old place, this was something refreshing. The buffet area seemed much larger than before, with much more stuff. Once seated, we were asked for our choice of soups: Cream of Mushroom or Chinese Vegetable Soup.

The mushroom soup was creamy and yum. I didn’t want to stuff myself, but couldn’t stop from finishing it either. The vegetable soup was alright, but salty. 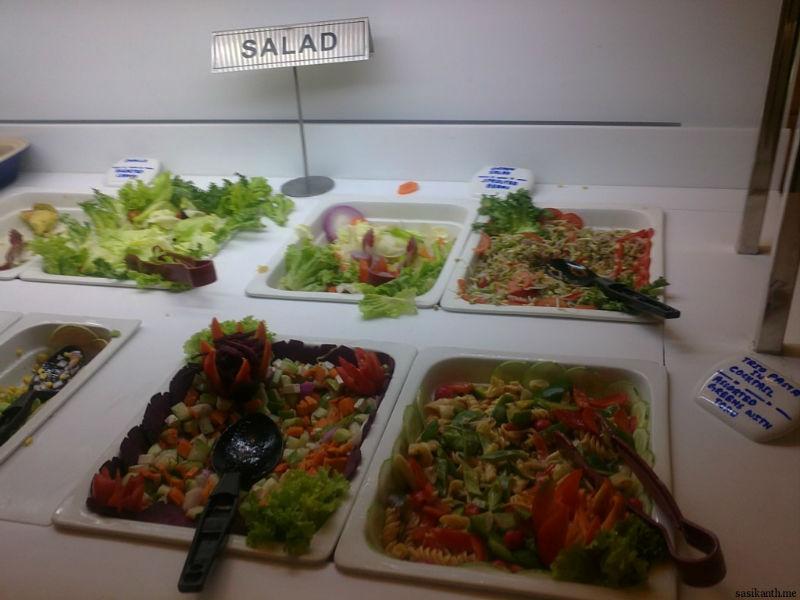 They had a large variety of salads, but I didn’t try any.

They used to serve the starters at the table along with the soups at the old place, but here, we had to get them ourselves. Good thing, for they had so much variety. They had Paneer in Three Flavors, Peas Dry Fruit Tikki, Vegetable Shashlik, Spinach and Cheese Croquets, Cabbage Carrot Dimsum, Soyabean Dimsum, Papdi Chat, Bhel Puri, Banana Dosa, Podi Masala Dosa and Peserattu made at the live station. Uff!!

The Paneer was not so fresh and a lil too hard, could have been much better. The Tikki was good, but I couldn’t taste any dry fruits; the Shashlik, alright, very dry; and the Croquets, too oily, no salt, no taste.

The Dimsums, both varieties, were very very good. Perfectly steamed and yummy!! I also loved the hot garlic sauce served alongside.

The Dosas were nothing great. The Banana dosa was a nice experiment and the Masala Dosa (with masala mixed into the batter) was a lil sour. I didn’t try the Peserattu. 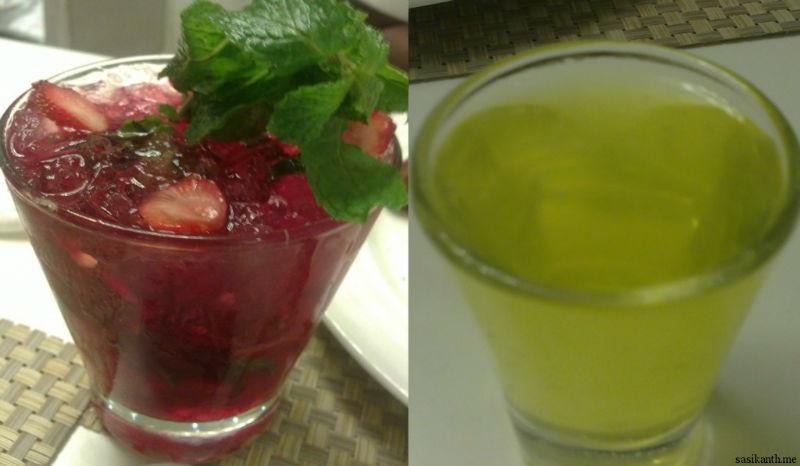 For drinks, they had Pineapple juice. It was a sweet concentrate, and the quantity served appalled me (It was served in a Tequila glass). Apart from that, we ordered Cranberry Juice. This time, the quantity was good (it better be for it costed 150 bucks!!), and had cut Strawberry pieces in it. It tasted alright, but I wish it had less ice. 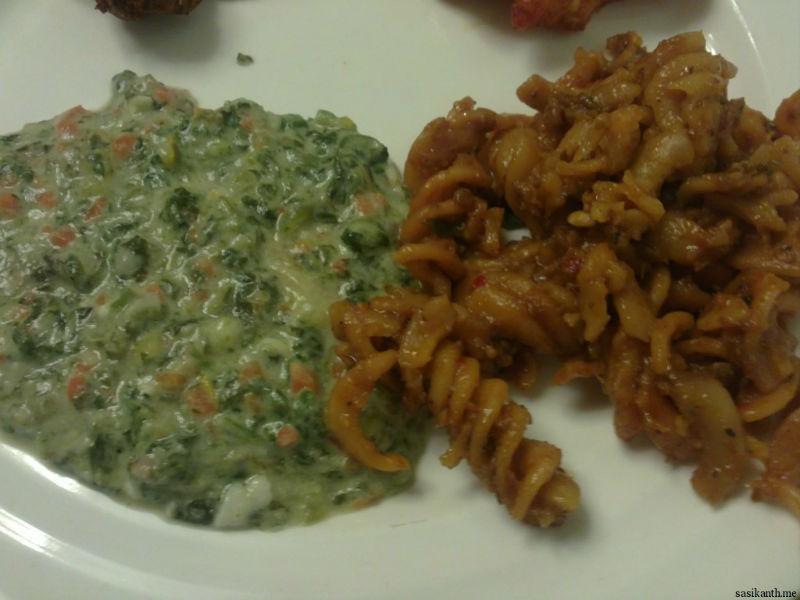 On the buffet, they had Indian, Chinese, Italian and Thai. I started off with the Italian: Lasagna and Fusilli Arrabiata. The Lasagna was cheesy, yummy and one of the best I’ve had in recent times. The Fusilli though was disappointing; over-cooked and without proper flavor. 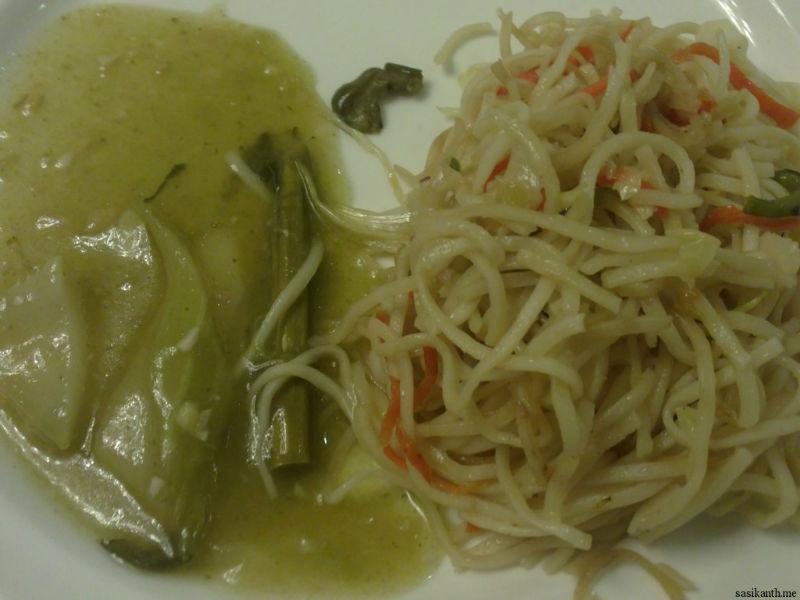 Next to the Chinese section; they had Vegetables in Lohan Sauce and Drunken Noodles. The sauce was good while the Noodles were bland, nothing drunken about it.

The Pannner again was not so fresh, but the gravy was good; the Bhendi was yum, a lil too oily; Chowgra, Gawar and Aam were alright; the Methi Chaman, again, was yum; and the Dal was decent. The Pulkas on the other hand were too dry with lots of dry flour.

In the rice section, they had Moong Dal Khichdi, Biryani and White Rice. The Khichdi was okay okay, Biryani, as with other buffet places, disappointing. But the white rice with Thai Red Curry was awesome. Loved it. 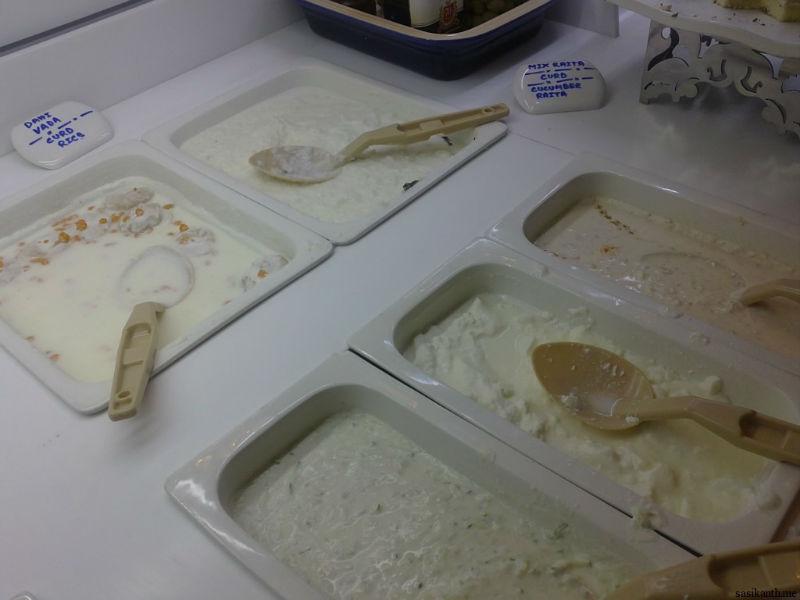 There was also Chamagadda Pulusu (Sweet potato Dal) and Kothmir Vankaya (Eggplant) on the south Indian front which I didn’t taste. I was so full, that I couldn’t dig into the curd rice and other stuff they had either.

There were lots of accompaniments to go with the meal. 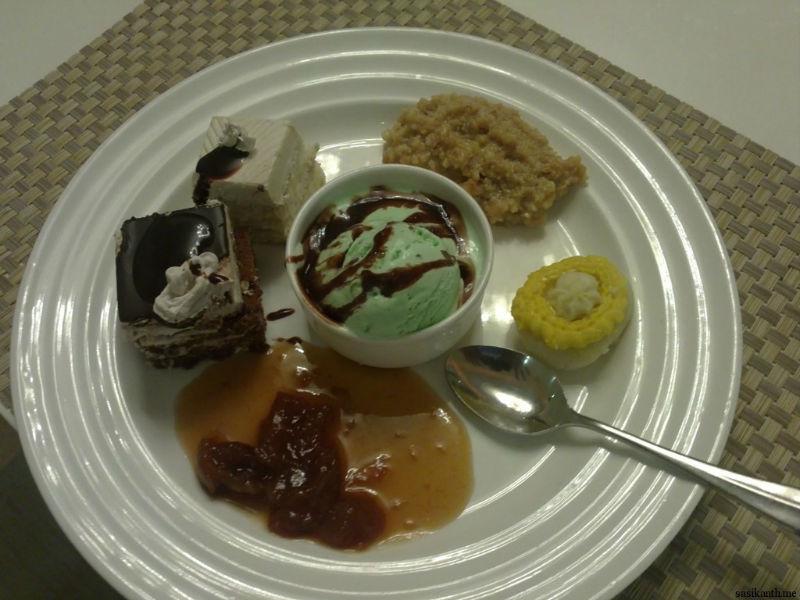 The Kurbani was perfect and the Chum Chum’s were dry, the Halwa was amazing, and the cakes were decent. The Pista ice-cream with Hershey’s on it (I know that it’s a weird combo) tasted yum.

Overall, a pretty good meal. Not all items were great, but with so many dishes, even half of them being good is reasonable. The pricing was decent for such a lavish buffet. The service was pretty good as well. It’s a perfect place for a family get together. I’d suggest it for anyone who wants to have a good vegetarian meal!