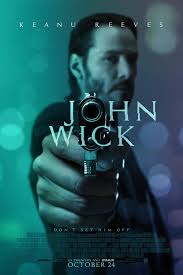 Keanu Reeves is an actor with great talent. Be it Speed or The Matrix, he’s had this ability to emote with the straightest face possible. And his performance in John Wick is no different.

Directed by debutant Chad Stahelski, John Wick is a simple revenge action thriller. In all honesty, the storyline is plain vanilla. But Chad does a great job thanks to some amazing screenplay. The sleek shots are fun to watch on-screen, and though the movie is very predictable, it keeps you engrossed till the end.

Keanu is great in the title role, and totally lives up to the expectations created in the first few minutes of the movie. Michael Nyqvist is perfect as the antagonist who knows he’s gonna lose everything fighting John Wick. Willem Dafoe and others are alright.

Music and background score by Tyler Bates and Joel J. Richard is pretty neat. The sound effects were really good. Editing by Elísabet Ronalds and cinematography by Jonathan Sela are both effective.

Is it worth your time and money??: John Wick is a sleek and stylish thriller with some good acting and crisp screenplay. If you like action films, then this one is a must watch.

Worth mention: The build up to John Wick’s character, simply superb!