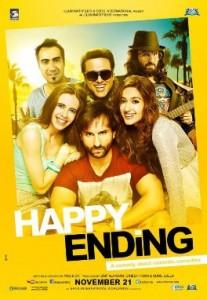 The trailer looked similar to Saif’s own movies from his production house, especially Love Aaj Kal. And unsurprisingly, the movie is more or less similar. But…

Raj and DK are directors who’ve made different films till date. Be it 99, Shor in the City or Go Goa Gone, their movies have been really ‘hatke’. But come Happy Ending, they’ve played safe. While the movie is quite different from the regular RomCom’s, it’s still cliched and very predictable. Yodi, our protagonist is a once upon a time successful author who can’t commit into relationships. And as expected, he bumps into Aanchal, who doesn’t believe in commitment either. And guess what, he falls head over heals for her and is in love. How new is that? The directors try their best to make it appear fresh, but unfortunately you’ve seen it all in the past. Nevertheless, they’ve done a great job in creating simple humour, thanks to some amazing and realistic dialogues (Hussain Dalal). This adds the charm to the movie, and you might end up connecting yourself with the characters. The screenplay is neat while the direction is alright.

It’s Saif’s film all the way. He does a good job on acting front (for he’s already played similar character). However he looks aged for most of the film while Govinda, who charms in his brief appearance as a Bollywood actor, actually looked better and younger than him. Ileana looked really pretty and did a good job. She’s come a long way since her debut film Devdas (Telugu). Kalki is perfect as the naggy girlfriend while it was nice to watch Preity play a mature role.

Is it worth your time and money??: While it’s all very predictable, I’d still say yes for the movie never bores you and I love the message put across. Apart from dialogues, acting is neat, cinematography is perfect and I enjoyed the music. With a runtime of less than 150 minutes, I feel it’s a nice way to spend your weekend. However, if you’re expecting something new, give this one a skip.

Worth mention: The title. While it remind us of a special kind of massage, I loved the way it was conveyed in the movie; you create your own Happy Ending 🙂