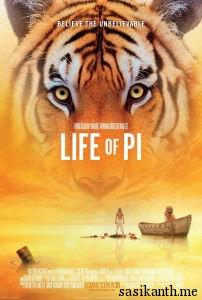 Directed by Ang Lee, Life of Pi is a simple story told in a very effective way. The film grips you right at the start, and you are engrossed in Piscine Molitor aka Pi’s life all through. You can emotionally connect with Pi, feel his pain and joy, and that’s what makes the movie work. The subtle humour is wonderful.

Acting by Suraj Sharma is superb and he couldn’t have asked for a better debut. He digs into the role with all his might and comes out a winner. Irrfan Khan is good as the older Pi, while Tabu looks stunningly beautiful as Pi’s mother. The Royal Bengal Tiger aka Richard Parker is a graphic wonder (to an extent that you would think he was real if no one told you that he were computer generated!!)

Direction is perfect, and so is the screenplay. However, I was kinda disappointed with the ending for it could have been much better. The graphics are simply wonderful. They look a little unrealistic at times, but I’ve never sailed in the Pacific at night, so I wouldn’t know :P!! The 3D effects are really good – they made me jump out of my seat on a couple of occasions.

Is it worth your time and money??: Absolutely!! It’s a visual masterpiece. A better and gripping ending could have made Life of Pi a magnum opus. But still, it’s a brilliant film nevertheless. Go rediscover yourself!!