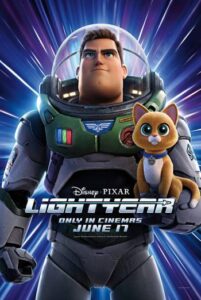 Toy Story series happens to be one of my favourite movie series to date, and I was excited when Lightyear was announced. But the excitement died soon once the trailer was out. Unlike the Buzz in the Toy Story series, I thought that this Buzz didn’t have the warmth and lacked the nostalgic touch you’d expect; and I felt the same even after watching the movie.

Nowhere connected to the Toy Story but for the small write-up in the titles, Lightyear tells the origin story of Buzz Lightyear and his adventures as a Space Ranger. Scripted by Matthew Aldrich, Jason Headley & Angus MacLane, and directed by MacLane (who co-directed the mediocre Finding Dory in the past), Lightyear doesn’t feel like a Pixar film. Yes, the animation and graphics are great, and the movie does follow the Pixar theme of a character venturing out into the world and learning to appreciate his friends and family. Still, the emotions and core crux of connecting with the audience were amiss in this one. At the end of the movie, all I felt was, okay, that was just another one, but that’s not what you’d expect from a Pixar film, right? (oh wait, none of their movies in the recent past have felt like that! ). The confusing timeline aspect was also too much to handle (imagine having to explain that to my 3-year-old!).

Chris Evans does his best to pour life into Buzz and make the character his own, but bottom line, he’s no Tim Allen. The rest of the voice cast is alright.

Music by Michael Giacchino is okay. Editing by Anthony J. Greenberg could have been better for even at 107 minutes, the movie seemed long.

Is it worth your time and money?: Skip this one in the theatres and wait for it on Disney+.