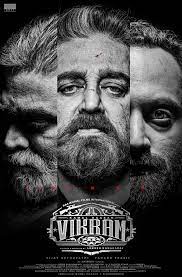 Kamal Haasan is one of India’s best actors. But lately, his movies, similar to his personal life, seem too self-focused. Does Vikram stand out?

Scripted and directed by Lokesh Kanagaraj (part of his cinematic universe), Vikram starts with the murders of a couple of NCB members and an ordinary man, Karnan. Amar (Fahadh Faasil), a black-ops squad/sleeper cell commander is pulled in to investigate, and soon realises that the murders are related to missing drug containers owned by Sandhanam (Vijay Sethupathi), a local cartel leader and a ruthless man. It all comes down to who’s Karnan and how Vikram (Haasan) is connected to the all of this.

In the first half, Lokesh focuses on establishing the characters of Amar and Sandhanam, while the entire second half is about the triangular conflict between Vikram, Amar and Santhanam. While things might seem a little confusing, Lokesh holds our interest thanks to the crisp screenplay in parts. However, some episodes involving Sandhanam and his abilities after getting stoned are ridiculous and even funny. I also thought the interval bang was not well executed; c’mon, there’s one guy and 100’s of goons and police, but not a single gun? There are a quite a few illogical sequences like these in the film.

Kamal Haasan plays his age but looks sophisticated and stylish. He has a paunch in the first song, and I was like, whoa. But even with it, he delivers sleek action sequences in the second half. Fahadh Faasil carries the entire first half by himself and does a fantastic job. Vijay Sethupathi looks menacing, but I thought his character was not well scripted. Narain continues his part from Kaithi as Inspector Bejoy and is decent. Suriya impresses with his act as the antagonist (future films) in the climax. The rest of the cast is alright.

Music by Anirudh Ravichander is groovy and makes an impact on screen. The title track and the music pieces (Once upon a time & Wasted) are well used as background score. Editing by Philomin Raj is mediocre at best; films of this kind need to be sharp, but he fails miserably. The cinematography by Girish Gangadharan is top-notch. The action sequences are well choreographed.

Is it worth your time and money?:If you like action and slick films, Vikram is your cup of tea. But at the same time, the screenplay might be too much to handle at times for a regular moviegoer. Also, there are references to Kaithi/Khaidi, so it might be a little difficult for you to follow if you haven’t watched it.

PS: It would be great if Lokesh could combine Dilli and Vikram’s characters in the next film with Rolex as the villain, rather than making two separate sequels.