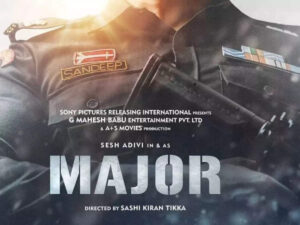 I’ve heard good things about Major and was excited to watch this movie. However, I wasn’t much impressed. I believe that it is tough to make a biopic on a war hero, and while Adivi Sesh (script and screenplay) does his homework and comes up with a good film, too much cinematic liberty makes this just an average film for me. Maybe I would have better connected if it were a regular film.

Direction by Sashi Kiran Tikka is mediocre. The Taj siege sequence could have been better handled, for there was pretend and over-the-top action. I am sure there were some brave acts inside the hotel during the siege, but all the team did was make it look larger than life rather than making it real for the hostages and the soldiers. A more nuanced approach would have worked wonders! The woman being “alone” episode also doesn’t add any value to the film.

Adivi Sesh puts in all his mettle to look and be like Major and does a good job. Prakash Raj and Revathi are aptly cast and do their parts well. Revathi is brilliant in the last episode. Saiee Manjrekar and Sobhita Dhulipala are alright. Murali Sharma’s act could have been toned down.

Music and background score by Sricharan Pakala is effective. At about 2 hours, editing by Vinay Kumar Sirigineedi and Kodati Pavan Kalyan is good. The cinematography by Vamsi Patchipulusu is average

Is it worth your time and money?: Major isn’t a bad movie; if anything, it’s a good action movie. But when you add the tag of it being a biopic, it doesn’t work. I am sure Sandeep Unnikrishnan did more courageous stuff than what is showcased in the movie. But, Sesh and the director make his sacrifice for the nation look more commercial and action-oriented rather than making it real and connectable. Also, too much sentiment and cinema/drama dilute the effect.