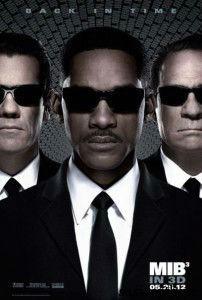 It’s been a long time since I watched the Men In Black movies, but from what I remember, the first one was really entertaining while the second one was a bore. I believe the third installment of the series, 15 years after the first movie, falls somewhere in between the first and the second. Its entertaining on most occasions, but is also a bore at times.

Director Barry Sonnenfeld’s Get Shorty (1995) is one of my favorite films. He is one director with talent. In MIB3, thanks to Will Smith’s amazing coming timing, Sonnenfeld creates few amazing moments between Agent J and Agent K (both young and old). But the script, written by Etan Cohen, lacks the required punch to make this a classic. There are moments in the film which made my self question if I was watching a Hollywood film or a Bollywood one. Not all aspects of the script are not explained clearly as well (either that, or I didn’t get them :P). The screenplay tends to lose pace in the second half, and that’s when you tend to yawn. Nevertheless, some neat direction, apart from the acting, saves the film.

Will Smith shines as Agent J. As already mentioned, his comic timing is just perfect, and its a treat to watch him. Tommy Lee Jones has minimal screen presence, and is good in his role. Josh Brolin is perfect as the younger Agent K. Instead of trying to imitate Tommy Lee too much, he comes up with his own version of Agent K, which I thought was pretty impressive. The rest of the cast was alright.

On the technical front, music by Danny Elfman could have been better. The re-recording though was very good. Cinematography by Bill Pope is pretty decent. Most scenes were shot for the 3D effects, which honestly, weren’t anything great. Editing by Don Zimmerman and Wayne Wahrman is alright, except for some patchy work towards the end. The art and set decoration is pretty impressive. The flashback episodes looked very real. The graphic work is also pretty impressive. Production values by Columbia pictures seemed a little on the low side.

Overall, an average film. It could have been way better, but is not. However, thanks to some good acting, its watchable. Give it a shot at your leisure.

Acting: 8/10
Story-Screenplay-Direction: 6/10
Technical Aspects: 8/10
Is it worth your time and money??: If you’ve liked the MIB series thus far or if gross alien stuff doesn’t freak you out, then yes. You may watch it for Will Smith.