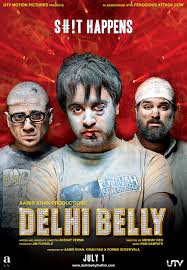 No, it didn’t take me 20 days to watch Delhi Belly. I watched it on the first day in Mumbai, but unfortunately in Hindi. Three weeks later, I finally get to watch it in the original Hinglish version, and here is my review!

Plot
Tashi (Imran Khan), Arup (Vir Das) and Nitin (Kunal Kapur) are three roommates living in a small, filthy apartment in Delhi. Tashi works as a journalist and Nitin is his photographer. Arup works as a cartoonist. Tashi’s air-hostess girlfriend, Sonia (Shenaz Treasury), whom he is forced to marry in a month’s time, requests him to deliver a package for a Russian. Tashi asks Nitin to deliver it for him, and Nitin relays it to Arup. Finally, it does not end up with the person it is supposed to, a gangster named Somayajulu (Vijay Raaz). The consequences form the rest of the story.

Actors Performance
Imran Khan does it, finally!! He proves that he can act, and makes sure he plays Tashi’s character to perfection. Vir Das is excellent. He uses his stand-up comedian experience to the fullest. Kunal Kapur was superb in his role as Nitin. It’s not so easy to create neat humor using fart jokes, while underplaying it. But he always gets it right and its never to gross. Shenaz Treasury is alright as the bitchy girlfriend. Poorna Jagannathan is good as Tashi’s other interest. But the show stealers are Vijay Raaz and his sidekick. Vijay Raaz is superb as the gangster. The rest of the cast is alright. Aamir is at his usual best in the end credits.

Story-Screenplay-Direction
Have you guys seen Guy Ritchie’s 1998 caper film “Lock, Stock and Two Smoking Barrels”?? If you answered yes, and if you are intelligent, then you should have known the story of Delhi Belly. It is very difficult to write the story and screenplay for a caper film. Lock, Stock was the first movie of its kind, and had nothing to live up to. After watching it, Ritchie’s next film “Snatch” itself seemed too predictable. It’s the way the genre is. But Akshat Verma (Story and probably Screenplay) does a very good job with the script. He infuses different sub stories into the main plot in a very effective manner, and makes sure its stays Desi. There is not one dull moment in the film. Direction by first-timer Abhinay Deo (Game was actually his second film but released earlier) couldn’t have been better. He sucks out fresh performances from every character. Making proper choices, he could be the next big thing in the industry.

Other Departments
Music by Ram Sampath is excellent. I don’t think I need to talk about “D K Bose”. It’s so in my head that while watching the climax of ZNMD, I was singing this song aloud. The background score is effective, and it is made sure that all the songs of the album are there in the movie (My friend suggested that the bg was similar to Lock, Stock.. Hmmm). Dialogues by Akshat Verma are mind-blowing. The slang used by today’s youth is all there. I’ve seen both versions of the movie, in Hindi and the original Hinglish. Dialogues in the original are much more witty than the Hindi one (Few of the literal translations into Hindi sound gross). Editing by Huzefa Lokhandwala is good. With a run time of 96 minutes, the film seemed perfect. Cinematography by Jason West is of top-notch quality. Jim Furgele, Ronnie Screwvala and Kiran Rao should be really appreciated for having the guts to produce such a different film. But it is Aamir Khan who makes the film work. If it were not for him, Delhi Belly would never have made it so big. Enough said!!

Analysis
Made on a budget of 25 crores, the movie grossed 52 crores in the first 2 weeks. That speaks for how good the movie is. The plus points of the film are the cast and its awesome production values. Not to forget the publicity. The genre might make the movie a little too predictable, but it still keeps you glued to your seats. It is not a movie to be watched with your parents, but to my surprise, half the cinema-hall was filled with families watching along with their kids (both for the Hindi and Hinglish version). Overall, it’s the birth of new cinema in India, not to forget a writer, and a director. If you haven’t already, go watch it, preferably the Hinglish version. It’s a decision you mostly wont regret!!