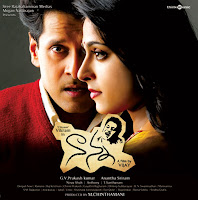 Plot
Krishna (Vikram) is a mentally challenged guy working in a chocolate factory at Ooty. His wife expires while giving birth to their child Vennela (Sarah). Krishna and Vennala share a very close father-daughter relationship with both taking care of each other. Vennela is taken away by her grandfather when she is 5. Anuradha (Anushka) is a lawyer who helps fight the case for Krishna, and this forms rest of the story.
Actors Performance
After Kamal Haasan, if there is anyone else who can play such a challenging role, its Vikram. He is exceptionally good playing the mentally challenged father. He expressed a lot using his eyes for most of the movie. He should be really appreciated for taking up such a role. The showstopper though, was baby Sarah. She was brilliant as the daughter and even overshadowed Vikram in certain scenes. However, the screen presence of both Vikram and baby Sarah is minimal during the second half of the movie. Anushka is good as the lawyer, but I felt something lack in her performance. She was looking really good though. Amala Paul has a minor role and was adequate. Naseer has a meaty role and was good. The guy who played Anushka’s assistant was really good.
Story-Screenplay-Direction
Its a simple story about the relationship between a mentally challenged father and a doting daughter, and the consequences when they are separated. Director Vijay, who also provided story and screenplay, had a good story at hand with and ensemble of really good artists, but was unable to deliver a complete package. While the first half of the movie was to establish the father daughter relationship, he tried to infuse unnecessary scenes and create humor. Krishna’s friend doubting his wife for helping Krishna with Vennala seemed absurd. He did not make use of the main performers of the film by limiting screen space for both Vikram and baby Sarah in the second half. It seemed more of Anushka’s film post interval. Also, there seemed to be quite a few loopholes in the script. However, he could generate awesome stuff from little Sarah. The screenplay seemed alright, but nothing great.
Other Departments
Music by G. V. Prakash Kumar is alright. Lyrics by Anantha Sriram are mediocre. I could not make sense of even one song in full. Dialogues by Shashak Vennelakanti are ok. Cinematography by Nirav Shah is really good. Its not an expensive film, and the producers made sure to get things right.
Analysis
Its a movie to be watched for Vikram and baby Sarah. Both of them are surely gonna top the highest awarding honors for the film. Sadly, there is not a strong story to hold up their awesome performance. A better script could have made Nanna create wonders at box office. Also, there is a lot of Tamil nativity in the film (no offence to my Tamil friends). Overall, Nanna is a decent film and can be watched for its performances.
Verdict: 7/10
PS: I went for the movie along with my cousin, and we had quite an experience. We had tickets for Sunday’s show and thought it was for Saturday, realized it almost 30 mins into the movie. Luckily we found exactly 2 empty seats in the packed theatre. Once in a life time experience I say.
Spread the love