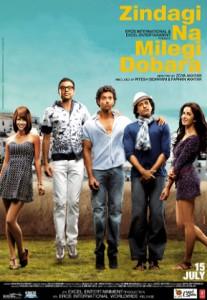 Plot
Childhood buddies, Arjun (Hrithik Roshan), Imraan (Farhan Akthar) and Kabir (Abhay Deol) decide to go on an adventure road trip when either one of them gets engaged. Kabir gets engaged to Natasha (Kalki Koechlin), and Imraan plans a road trip to Spain, for his own personal reasons. Arjun is initially not interested because of his recent breakup, but then agrees to join. There, they meet Laila (Katrina Kaif), and together have an adventure of their lifetime.
Actors Performance
The three leading actors play tailor made characters and are excellent. Hrithik looks stunning and does a real good job, especially during the emotional scene. Abhay is good. But the real star for me was Farhan. He was excellent and his comic timing was perfect. Katrina was delicious to look at and did a good job as well. Kalki was perfect as the possessive girlfriend. Naseeruddin Shah plays a cameo and was adequate. And ya, the surprise package, Ms. Bagwathi was terrific!! 😀
Story – Screenplay – Direction
From the trailers, I was hoping it to be something similar to “Dil Chahta Hai”, but turned out to be very different. Its a feel good story with romance infused into it while not being an integral part of it. Direction by Zoya Akhtar is good. She seems to have improved from her first venture. Screenplay by Reema Kagti and Zoya Akhtar is neat and effective. But the film seemed to be a little too long and draggy towards the end.
Other Departments
Music by Shankar-Ehsaan-Loy is very peppy and catchy. The background score by S-E-L and Tubby is really good. All songs are shot well. Hrithik excels while dancing for Senorita. He’s so damn good, that you forget to watch the other two guys. Editing by Anand Subaya could have been better. Dialogues by Farhan Akhtar are witty. Cinematography by Carlos Catalan is awesome. The underwater shots and shots at San Fermin (Bull run) are incredible. Skydiving shots by Joe Jennings leave you breathless. Beauty of Spain is captured in every frame. If Harry Potter was graphic visual feast, this one is scenic feast. Productions values are superb. Credit to the art department for perfectly recreating the La Tomatina Tomato festival.
Analysis
The first half of the movie is really entertaining and witty. Post interval, the film seems to drag towards the end. Plus points are excellent performances by the lead actors, entertaining first half, and awesome cinematography. On the flip side, the movie is a little too long and draggy towards the end (almost 3 hours). Overall, its a good watch. It might be liked by the elderly more than the youth. A few might find it preachy and therefore dislike it. It all depends on your attitude towards life, cos you see, Zindagi Na Milegi Dobara! Go watch it, its a feel good film.
Verdict: 8.5/10
PS: I recently watched the movie again, this time with amma, and then forced dad to go watch the movie along with his friend. Everyone loved the movie. This friend of Dad, Chatla Sreeramulu garu, happens to be a high profiled gentleman with connections to the Telugu film industry (He trained Ram for Devadasu). He enjoyed the movie so much that he couldn’t stop talking about it for the next two days!
Post the watch with amma:
Amma’s Verdict: 8/10
Edited after second and third watch 🙂
Spread the love