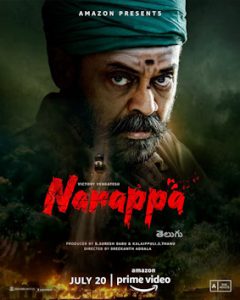 Quite a few Telugu movies were released on OTT in the recent past but none made an impact. After a lot of delays, Narappa was confirmed to release on Amazon Prime, which airs the original Asuran as well. Risky move? Let’s find out.

A remake of the 2019 Tamil film Asuran, which in itself is influenced by the real-life Kilvenmani massacre that occurred in Tamil Nadu in 1968, Narappa narrates the story of a poor farmer and his family in the 1980s, and their tussles with the local landlord resulting in Narappa’s younger son murdering the landlord. Narappa, who is looked upon as a spineless loser by his son, flees with him into the forest to protect him. Rest of the story is about Narappa’s hot-blooded past, and how he saves his son.

I watched Asuran first before starting Narappa, and I felt that I was watching the same movie again, for it is a frame-to-frame replica of the original. Except for one fight, every scene is literally a cut-copy-paste. The sets, background characters, most of the locations, down to the minute little detail. I’ve seen quite a few remakes, but this one seemed extreme. 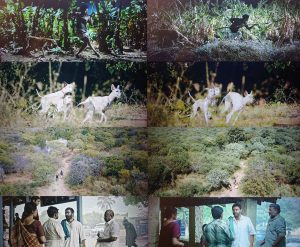 The only difference I observed is in the climax fight, the original version has the village elders disapproving the son being hurt, which is missing in the Telugu version. That apart, same to same. Srikanth Addala, the credited director of the Telugu version, didn’t even attempt to showcase the storyline as per his point of view. I understand that Vetrimaaran wrote the screenplay for both versions, but how difficult is it to make the movie yours? Addala didn’t even do a good job replicating the emotions for the punch was missing.

Comparison apart, I honestly didn’t feel that the story that appalling in the first case. The concept of the elder son rebelling against the landlord was sure to result in him being killed; it’s like he’s asking for it.

It is more or less a cakewalk for Venkatesh, and he apes Dhanush in every shot. What I fail to understand is why he didn’t make the character his own. Priyamani is okay, but her dubbing in the slang seemed a little off. Ammu Abhirami and Aadukalam Naren are the two actors who reprise their roles from the original and do justice. Ammu Abhirami, however, looked odd romancing Venkatesh onscreen given their age difference. Newcomer Rakhi, who played Narappa’s younger son, does a commendable job. The rest of the cast is alright.

Mani Sharma is credited as the music director and G. V. Prakash Kumar is thanked in the title credits, but I thought it should have been otherwise for the music and background score is more or less the same as the original (but for the only different song is “Ooo Narappa”). The title score is good. Art work by Gandhi Nadikudikar in the flashback episodes could have been better. It’s regular business for cinematographer Shyam K. Naidu and editor Marthand K. Venkatesh for they just had to copy the original with no uniqueness. The Telugu version is about 15 minutes longer than the original, I wonder why?🤔

Is it worth your time and money?: If you’ve watched Asuran, then it doesn’t make sense at all. If you are a non-gulti, then watch the original and give this one a miss. If you are a telugite, then watch it at you’re leisure. It’s not a bad film, but I wish it had some originality to it. I rest my case.

Worth mention: The original?