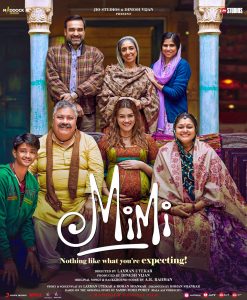 Director Laxman Utekar’s previous film Lukka Chuppi was a decent flick and the trailer of Mimi looks promising. But does the movie live up to its expectations?

Scripted and screen-written by Utekar and Rohan Shankar, Mimi, a loose remake of the 2011 Marathi film Mala Aai Vhhaychy! (which was remade in Telugu as Welcome Obama in 2013), tells you the story of a young damsel from Rajasthan, wanting to make it big in Mumbai. In want of quick money, coordinated by a local taxi driver Bhanu, she agrees to be a surrogate mother of an American couple. Few months into the pregnancy, the couple backtracks when they get to know that the unborn child might have Down Syndrome. The rest of the story is about how she handles the situation, and whether she gives up on the child.

Utekar does a good job handling the subject, infusing humor in most of the scenes. However, the reasoning for the doctor revealing that the child might have a disability, knowing that they might change their decision, seemed contrived and unconvincing. Also, Mimi’s parent’s reaction when they get to know about the pregnancy could have been better showcased. They are super upset in the first instance, and the scene turns comic when Mimi lies that Bhanu is the father. Some of the dialogues are well-written and impactful.

Kriti Sanon gets a meaty role, and she excels playing Mimi. She should be commended for taking up such a challenging role. Manoj Pahwa and Supriya Pathak are alright as her parents, but their characters could have been more powerful. The showstopper however is Pankaj Tripathi. With perfect yet subtle comic timing, this is one of his best performances.

Music by A. R. Rehman is not the best, but passable. I liked “Hututu” song in particular. The background score was a little uneven though. The cinematography by Akash Agarwal, and editing by Manish Pradhan are good. A little over 2 hours, the film’s length is just about perfect.

Is it worth your time and money?: It’s a good watch, yes. After Pagglait, Netflix has another good film under their belt.

Worth mention: Pankaj Tripathi is at his best!

PS: I liked the fact that they set up the story in 2013 when foreign surrogacy was still legal in India (banned later in 2015).

I also came across a few comments on social media that the film showcases Down Syndrome in a bad light. I agree to disagree on that point for I thought that the entire episode was dealt with maturely. Yes, they still showed it as a disability, but Mimi rejects the idea of abortion and decides to carry the child to term. If anything, the American couple is shown as small-minded fold who return for the child when they realize that he’s alright. 🤬