I’ve seen this place on my way to work and wondered who would name their restaurant Gudgudee (They even have a tagline – “Tickle Your Tastebuds“). But having read good reviews about them, decided to drop in last month to celebrate my mom’s birthday. But alas, they were closed, and we ended up eating at President Dhaba (which turned out to be a disastrous affair, but that’s a story for another day). Come last Saturday, they were open, and here we were.

We thought they might be empty walking in, but to our surprise, they were about at about 50% capacity. They have a huge place, and that means a lot. Brightly lit, with good views of the metro and the Hitech City main road, I was impressed with their overall ambience. Something I liked is their low seating towards the corners. We settled down somewhere in the middle.

Like with most of the other places, they had an online menu, which turned out to be a little different from the one I checked on Zomato. I was a little disappointed with this for I had more or less decided what I wanted to order, and some of these weren’t listed. Anyways, we started with Tomato Basil Soup and Shanghai Rolls, and for the main course, ordered Malai Kofta, a portion of Stuffed Paratha and Garlic Naan each, 4 Phulka, and Paneer Tikka Biryani. 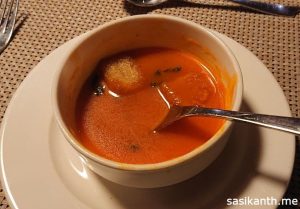 The Tomato Basil Soup was served in about 10 minutes. It had a strong Basil flavor to it and was decent. The bread crumbs were served separately which ensured that they were crisp when we dropped them into the soup.

Shanghai Rolls happen to be one of my favorite starters, and the ones you get at Palace Heights are the benchmark for me. The ones served here were crispy and good but nowhere close. I would have preferred them to be a little more spicier.

While we were still enjoying the Shanghai Rolls, the main course was served. 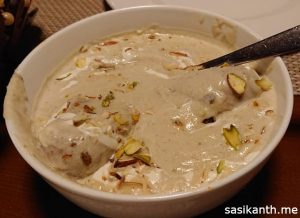 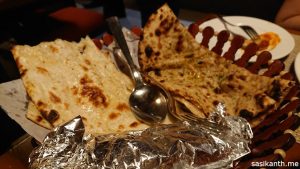 I asked for a not-too-sweet Malai Kofta, and they obliged. With a couple of kofta balls made of paneer and khoya, the curry was creamy and yummy. The Stuffed Paratha, with a lot of butter on it, was soft and tasty. The Phulka, though wrapped in foil, turned out to be super kadak and almost inedible. We asked for a replacement, and they obliged with two out of the four (given that we already finished two). The winner of the roti basked however was the Garlic Naan. They were soft and had tons of garlic butter on them. 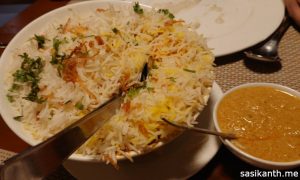 I was already stuffed with the Naan but managed to make some space for the Biryani. I’m glad I did for it turned out to be very good. With chunks of Paneer Tikka, the rice was well cooked, and the flavors were just perfect.

Overall, a good meal. But for the Phulka, we were happy with all the other dishes. I was also impressed with the portion sizes and thought the place offered value for money. Service-wise, most of the waiters were disoriented. Our lil one kept screaming “Bhaiya” to get their attention, but that didn’t help either. They definitely need to improve on this.

I’m gonna be back to try their Chinese offerings the next time around for their offering look tempting.