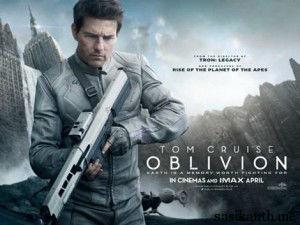 From the early rushes and trailers, it looked like one of those sci-fi films you’ve already watched. In fact, it reminded me of Tom Cruise’s War of the Worlds, which I didn’t like so much. Oblivion, thankfully, turned out to be different. Co-written and directed by Joseph Kosinski, it is a decent watch. Direction was good, while the screenplay was a little slow. Few scenes just seemed to drag the film down. A faster narrative would have helped it better.

Tom Cruise does well in the lead role, and managed to carry the entire movie on his shoulders. Olga Kurylenkoi and Andrea Riseborough are pretty good, while Morgan Freeman was alright in his brief role. On technical front, the cinematography by Claudio Miranda was of top-notch quality, with the graphics and sound effects being excellent.

Acting: 8/10
Story-Screenplay-Direction: 7.5/10
Technical Aspects: 9/10
Is it worth your time and money??: Oblivion is an entertaining watch.