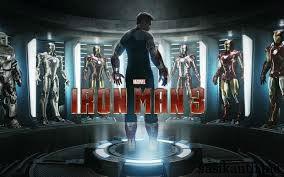 Acting: 8/10
Story-Screenplay-Direction: 7.5/10
Technical Aspects: 8.5/10
Is it worth your time and money??: Yes indeed. After disappointing with Iron Man 2, this one is a much better film. It doesn’t do better than The Avengers, but still is a decent film nevertheless. The story and screenplay could have been better though, for it has a number of loopholes. Direction by Shane Black is pretty neat, while the screenplay, co written by Black and Drew Pearce, seemed patchy and out of sorts at times. Things like a ten-year old kid help fix Mark 42 (suit) were quite startling, for its premise wasn’t established, and the antagonist leaving behind Tony Stark tied to a bedpost with two guards was plain stupid.

On acting front, Robert Downey, Jr. is at his usual best, while Gwyneth Paltrow, though good, looked really old. The franchise needs a new Potts in my opinion. Guy Pearce is very good in the negative role, while Rebecca Hall is decent. Ben Kingsley has a brief role, and is effective.

On technical front, music by Brian Tyler is pretty neat, and editing by Jeffrey Ford and Peter Elliot is alright, while cinematography by John Toll is very good. The long shots were well picturized, and the 3D effects on such shots were good.

Overall, it’s a decent watch. Walk in without any expectations and you might enjoy the film.