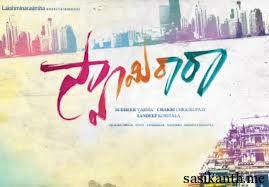 Written and directed by Sudheer Varma, Swamy Ra Ra is an average flick. The story is a potpourri of a couple of Hindi flicks, which are in turn inspired by a few Hollywood classics. Caper films have a very thin story line, and it is very important for the director to make sure that every character is connected while maintaining the pace of the film. Though he was able to do the latter to an extent, Varma introduced too many characters which made it all look patchy after a point. A faster screenplay would have been appropriate. The film started off well, but the unnecessary romance track, and a weak second half are its negatives.

Acting by Nikhil, Swathi, and rest of the cast is decent. Music by Sunny is good, but he should have avoided copying the title track straight off from the Hindi flick they borrowed the story line from (Shor in the City). Editing by Kartika Srinivas is alright, while cinematography by Richard Prasad deserves a special mention. However, the number of slow motion shots should have been much less for their effect was lost after a point.

Acting: 8/10
Story-Screenplay-Direction: 6/10
Technical Aspects: 8/10
Is it worth your time and money??: Swamy Ra Ra is a decent effort in making a Telugu caper film.