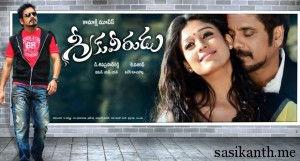 I am clueless on where to begin, for Greeku Veerudu was that bad a movie. It’s a story we’ve seen in many a films – a rich spoiled playboy (read Nagarjuna uncle) comes to India from New York (shot using green screen and graphics) to understand the importance of family and love. Now one can argue – how bad that could that be?? According to me, this one defines bad. The script is the same old-fashioned one which probably worked 10 years ago, with K. Vishwanath playing the same old grandfather role, saying no to love marriage initially, but later realizing his mistake, the aunties and their loser husbands, one bad guy with a loser son, and uncountable number of side characters. Dasarth has lost it, understandable, but what seemed more strange is why would others (read producer and actors) make a film with the same old formula, that too with an older Nagarjuna.

Talking about Nag, I did like his looks to an extent in the ads, but he looks really old in the film. The only place he looked good was in “Greekuveeruda” song, where in he has a different get up. On acting front, he is the saving grace of the film. Nayanathara looked glamorous, thank god for that. Brahmanandam has the routine bakra character, while the rest of the cast are put in just for the heck of it.

On technical and production front, the film is a disaster. Music is mediocre, but the background score is painful. Thaman needs to learn how to score for such bad movies. Editing by Marthand Venkatesh is sloppy, just like the screenplay. But what surprises me the most is the cinematography (Ani Bandari). Most of the film had graphics using static background – New York, airport scenes, outdoor scenes in India, climax shot in a village — all graphics. And the graphics were so bad that I felt like I was watching a second grade movie. I’m glad that they shot few scenes at least in real locations.

Overall, it’s a boring and dull film you’ve seen many a times – only thing different is an older hero. They claim it’s a family entertainer; forget entertainer, but in a way it shows how better off your family is compared to the dumbass one in the movie. Unless you are a diehard Nag fan, stay away please!!

Is it worth your time and money??: No, please skip it!

PS: Am glad Naga Chaitanya didn’t do the film. I (and almost everyone who watched the film) would have been dead by now if it were him as Greeku Veerudu!!