On a lazy Sunday afternoon, I decided to go hog at Viva Italia. But the scorching sun made me think over it for I wanted to go sit at an air-conditioned place. Read about this new place called Peperoncino on Zomato, and decided to give it a try. I dropped in a little after 2:00 PM, and the restaurant was empty (literally). The place looked decent, with well done interiors, a glass kitchen on one side, and a nice aerial view on the other (unfortunately of the slums).

Their menu looked pretty decent, and everything was priced more or less reasonably (for a restaurant of this size in this location). I ordered for ‘Funghi Ripieni’ (fried mushrooms stuffed with cheese and herbs) followed by a ‘Calabrese’ pizza (pepper sauce, mozzarella, onions, mushrooms, garlic and olives). 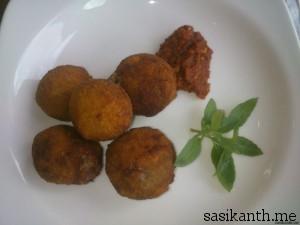 Thanks to the glass kitchen, I could see the chefs make everything from scratch. In about 10 minutes, the starters were ready and served. First off, I was a little disappointed with the quantity (It’s maybe because I’ve got used to huge portions of everything in the recent past). Anyways, the stuffed mushrooms tasted pretty alright, but were very oily. The Tomato chutney served along tasted pretty good. On the whole, a decent start, but I honestly was expecting something better. 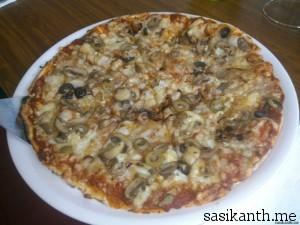 The pizza was served right after I was done with the starters. It looked good, with loads of veggies on it but tasted average. Though the crust was crunchy and well-baked, the pizza was too dry and lacked flavor. Tons of oregano made it taste better. It was supposed to be a little spicy because of the pepper sauce, but I didn’t find it spicy, for probably it was unevenly smeared across the base. I asked for extra cheese, but the pizza barely had any cheese on it as well.  It was a decent pizza, but not on my list of favorites.

I had read that their desserts are pretty good, so decided to give them a try. I asked the waiter to help me pick the best, and he suggested Tiramisu, followed by Cioccolato Fondente (chocolate cake with molten chocolate in the center). I opted for the latter, and I was told that it would take a while for the cake to be baked. 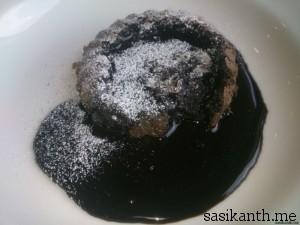 After about 15 minutes, the molten chocolate cake was served. For some reason, though it wasn’t mentioned, I expected it to be served with vanilla ice cream. It was good, but again, not satisfying. There was nothing special or ‘wow’ about it; it was just decent, and that’s what disappointed me.

Overall, an average meal. Food, ambiance and service were all decent. However, my want of going and enjoying a meal at a cool place was foiled for the place was burning hot, and I was sweating all through out. Since the place was empty, one air-conditioner was turned on only when I walked in. Midway through, when I complained that it was too hot, they turned another one on. The place was huge, and I was their only customer, but you don’t try to save on your electricity while the customer is sweating do you? The place has the potential to be huge, but it needs to work for it. And being empty on a Sunday afternoon doesn’t speak much either.

Give it a shot, but don’t expect too much. Probably my high expectations thwarted my experience. I’d suggest dinner, cos then you might enjoy the view.