Dropped in at Ohri’s Banjara for dinner the other day with a friend, and it turned out to be a dinner full of surprises. We first walked into Serengeti, but since both of us didn’t have a heavy appetite that evening, decided to munch on something at Eatmor on the ground floor. The place was pretty empty when we walked in around 8:00 PM, but got full as the night progressed.

We wanted to try their Andhra Firecrackers (veg). That apart, I wanted to have something new, so decided to order a portion of Veg. Dumplings. I’ve been craving for good dumplings in the recent past and was looking forward to them. I also ordered for my regular at Ohri’s, the Big Chill. 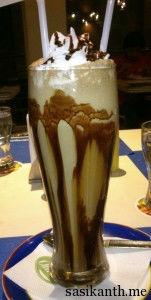 The Big Chill was served first, in about 10 minutes. As expected, the drink was very good – chocolaty, with a hint of coffee flavor, and loads of cookies and cream. 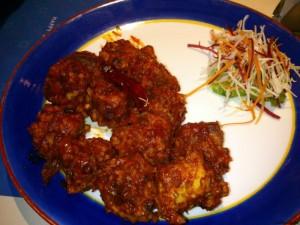 The Andhra Firecrackers were served next. I usually love this dish of theirs, but on this day, the paneer was stale, and therefore, they didn’t taste good. They infact were soggy and uneatable after a point. 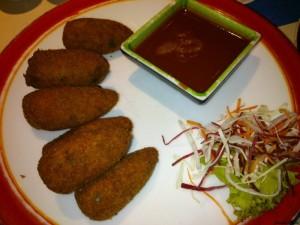 The big surprise though was when the Veg. Dumplings arrived. Traditionally, dumplings are cooked balls of dough, either based out of flour, potatoes or bread (more on dumplings can be found here). But the ones they served looked very different, so I called the waiter and made sure that he got the right order. Though he concurred, the things they served us are usually called Cutlets, which by the way, used to be very good at the erstwhile Havmor (Ohri’s Basheerbagh). I was in no mood to argue with him and decided to dig in. They tasted alright, but were a little spicy, and a couple of them were a little undercooked. My want of having dumplings down the drain!

For the main course, my friend ordered Chole Batura, while I ordered for something called Mushroom and Herbs. It took time for the order to be served, but since we were in no hurry, didn’t bother much about it. The Chole Batura was served first, and it tasted pretty good. My friend was happy with it. 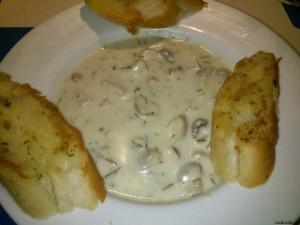 The second surprise was when the Mushroom and Herbs was served. What I thought would be a main course in fact turned out to be a thick soup. It was creamy, with loads of mushrooms, but had loads of Dill which wasn’t very fresh. This made it inedible in a way (or atleast, I found it inedible). The garlic bread served along also turned out to be very soggy. It was a big disappointment, and I actually stopped eating mid way through.

To finish things off, my friend wanted to order a Bull’s Eye, and so we did. 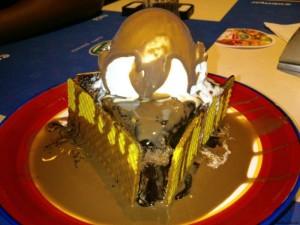 It took forever for the dessert to be served. When we dug in, we realized that the brownie was not fresh and it was really difficult to cut through it. We informed  this to the waiter, and he replaced the dessert for us. But again, it was no better, and so we decided to gulp it the way it was. Other than the ice-cream with chocolate sauce, there was nothing good about it.

Overall, a mediocre meal. Except for the Chole Batura, and may be the so-called dumplings/cutlets, everything else tasted poor. To add to this, the bill came to a whopping 1300, thanks to 300 bucks of taxes and service charges. Other than the ambiance and maybe the service, there was nothing worthwhile about our visit, barring the couple of surprises. I don’t think I’ll be going back to this place for a long time, not even for my beloved Big Chill.