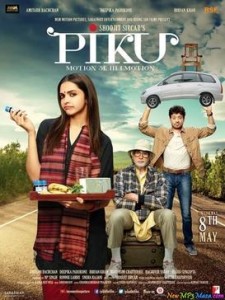 After hilarious Vicky Donor and an engrossing political thriller Madras Cafe, Shoojit Sircar now comes up with heart-warming tale of Piku. It might be Mother’s Day weekend, but this one is sure to impress any parent.

Piku, played by Deepika, is a headstrong independent woman in her 30’s. She lives with her father, played by Amitabh, who happens to be a hypochondriac, especially obsessed about his bowel movements. The story, written by Juhi Chaturvedi is simple, and Shoojit does justice to it by keeping it simple. The chemistry between all the leads is amazing. Though a number of episodes focus on bowel movements, they never make you uncomfortable. Dialogues are brilliant; I especially loved the ones written for ‘not a virgin’ episode. I also thought that the climax was very well conceived. Screenplay by Juhi is neat.

I don’t think there is a need for me to talk about Amitabh’s acting. As expected, it was brilliant. His Bengali accent seemed almost perfect. Deepika does total justice to the title role. There’s no glamour associated with her character, yet she looks stunningly beautiful. It’s more or less a cake walk for Irrfan; this guy can play a variety of roles at ease. The rest of the cast, be it Moushumi Chatterjee or Raghuvir Yadav, is equally good.

Music by Anupam Roy is subtle and soulful; it never gets too loud. Cinematography by Kamaljeet Negi is very good; he showcased Kolkata so beautifully that I wanna make it my next travel destination. Editing by Chandrashekhar Prajapati is good. The only irritating part of the movie is the excessive, unnecessary branding!

Is it worth your time and money?: As already mentioned, it’s a charming tale showcasing the struggles of headstrong father and daughter. While some might find it too slow or even cumbersome (because of excessive mention of bowel movements), I feel it’s a good watch. If not for anything, it deserves applause for the brilliant acting by the three leads.

Worth mention: The witty dialogues and the father-daughter chemistry.