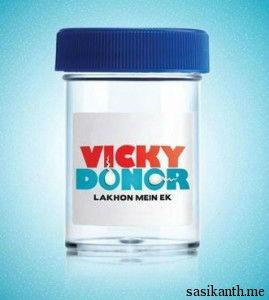 So finally, after 2 weeks, here I was watching Vicky Donor. Having heard so many good things about the film, I was quite apprehensive on whether I would actually like it for I was going in with huge expectations. 10 minutes through, and it looked like I was in for a disaster. But then, it got better and better, and there was no looking back. It’s an awesome movie.

Director Shoojit Sircar brings onto screen a beautiful, lighthearted rom-com, set against the backdrop of sperm donation. In a country where the concept of sperm donation is still considered a taboo, and in a film industry where there are more double meaning dialogues than simple ones, he comes up with this brilliant masterpiece, throwing light on the tabooed subject without stooping low. He handled the subject in a very sensitive way, while making sure to insert some subtle comedy into the film. The direction is very good and he was able to generate best performances from the relatively new cast.  Though it tends to get cheesy at times, Sircar comes up with some beautiful moments – mother and grand mother episodes, the wedding episode – brilliantly picturized. The dialogues by Juhi Chaturvedi are very well written, and help set the mood for the film. They have this typical Delhi flavor to them. The screenplay, also by Juhi, was very good.

I’ve never liked Ayushmann so much, until now that is. He couldn’t have asked for a better debut. He is fun to watch on-screen and it never seemed like was trying too hard either. His Punjabi accent and comic timing are his best assets. Yami Gautam is perfect as his love interest. She so got into the role, that I actually thought she was a Bong. She’s got a beautiful smile. Kamlesh Gill and Dolly Ahluwalia are the best saas-bahu pair I’ve seen in a long time. Their chemistry is extraordinary, especially in the drinking episode. Jayanti Das is very good as Ashima’s father. The scene where he talks about sex with Ashima is hilarious. The hands-down winner in the acting department though is Annu Kapoor. Be it his comic timing, or sensibility in serious episodes, he is an absolute delight to watch. There is no Vicky Donor without Dr. Chaddha, period!!

On the technical front, the movie is flawless. Music and background score is decent, and never too loud. Cinematography by Kamaljeet Negi is simple, yet perfect. Editing by Shekhar Prajapati is crispy. It’s a perfect debut for John Abraham as a producer. I only wish he didn’t flaunt himself in the end title credits.

Overall, a lovely movie with some impeccable direction and acting. The fact that a tabooed subject with sex as its background is able to run packed houses without being derogative in any sense shows how good this film actually is. It’s one film you might enjoy with your family as well. The second best film of the year for me (after Kahaani).