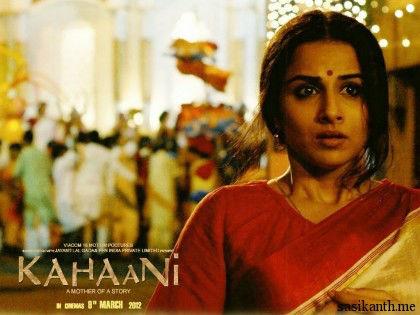 Vidya oh Vidya!! Wait, did I start my The Dirty Picture review with the same line?? Actually, who cares, for Vidya Balan has stumped me again!! This girl is absolutely brilliant, and is most probably gonna win all awards even in 2013!

Kahaani is a thought-provoking suspense thriller. It’s not perfect by any means, but the sheer presence of Vidya Balan, and some beautiful performances by the rest of the cast makes you forget all its flaws. Vidya is, am running out of adjectives here, stunning, and Parambrata Chatterjee is brilliant. After delivering a couple of duds, director Sujoy Ghosh comes up with a winner with the help of his co-writers Ritesh Shah, Sutapa Sikdar and Advaita Kala. As mentioned in the film, a pregnant woman searching for her lost husband against all odds makes you feel for her, and you can’t help but take part in her quest. Sujoy was able to maintain the tempo perfectly, creating beautiful moments, not once giving away the suspense to make you a part of that quest. Exciting screenplay, excellent cinematography in the bustling by-lanes of Kolkata, and a decent background score keep you, maybe not at the edge of you seat, but close enough.

Kahaani was not so well promoted, and doesn’t have good openings to boast off. It’s got no dancing numbers nor any sleazy skin shows. But it’s got Vidya, and Vidya brings all the entertainment we need. After The Wednesday, this is one of the best Bollywood thrillers I’ve come across. Don’t miss it!!

Plot
The film kicks off with a deadly gas attack in a metro rail in Kolkata. Two yeas post the attack, Vidya Bagchi (Vidya Balan), seven months pregnant, arrives in the city from London in search of her husband, Arnab Bagchi,  who had come on a project at the National Data Center a couple of weeks ago, and has been missing ever since. Satyoki/Rana (Parambrata Chatterjee), Asst. Sub Inspector of the Kalighat Police Station offers to help her in the search. The rest of the story is about the mysterious turns and events which finally help her find her lost love.

Actors Performance
Enough said about Vidya Balan, so I am not going to talk about her any further. As already mentioned, rest of the cast, though relatively new, was absolutely perfect and helped sustain the suspense. Parambrata Chatterjee looked really handsome and came up with an amazingly good performance. Nawazuddin Siddiqui was perfect as the rude IB officer.

Story-Screenplay-Direction
It looks like Sujoy Ghosh and Advaita Kala had an interesting intensive story to tell, but lost some steam when it came to script writing (Ritesh Shah, Sutapa Sikdar and Sujoy Ghosh). There are a number of loopholes in the script. Nevertheless, director Sujoy Ghosh was able to pull it off without ridicule in the end. He was able to extract terrific performances while keeping the audience thrilled. The interval episode was canned really well, leaving you asking for more and the twist in the climax was totally unexpected. The screenplay (Sujoy Ghosh, Suresh Nair and Nikhil Vyas), though a little hazy in the beginning, was really good. Leaving apart a couple of blunders, it is all connected very well in the climax.

Other Departments
Music by Vishal and Shekhar (couple of songs were used in the movie) is pretty good. “Ekla Cholo Re”  sung by Amitabh Bachchan is haunting. Background score is also good. Cinematography by Setu is awesome. He was able to capture the colors of Kolkata. Editing by Namrata Rao is neat. Production values by Viacom 18 are good.