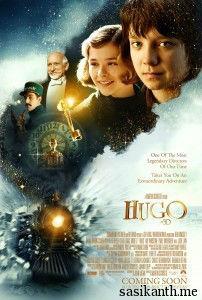 When was the last time you watched a film which made a difference to your life? When was the last time a movie made you question your purpose in this world?? Well, Hugo makes you do all that. It is one of the best films I’ve watched in my life. I loved it more than the Oscar-winning The Artist.

Though I’ve watched only a handful of his films yet, I love Martin Scorsese for his type of film making. He, without doubt, is one of the finest film makers in Hollywood. But Hugo is not a typical Scorsese film, for it aint got a dark side to it, there are no screenplay gimmicks, and no freeze frames. This one is an honest film with heart. It’s an adventure with which almost everyone can connect, where Scorsese tells the story of a twelve-year-old Hugo Cabret in the most affectionate way. Based on Brian Selznick’s novel The Invention of Hugo Cabret, the film is shot splendidly. Though the pace tends to get slow at times, it has these beautiful moments which make it an amazing film. Be it the budding romance between the Station Inspector Gustave and Lisette, or the one between Monsieur Frick and Madame Emile, or the moments created when Rene Tabard tells Mama Jeanne how beautiful she is, all are brilliantly shot. The direction is superb, and so is the screenplay by John Logan. Scorsese ends this masterpiece as an homage to cinema and the pioneers of film. He deserves a tribute himself, period.

Every character in the movie is finely crafted. Asa Butterfield wins your heart with his awesome performance as Hugo Cabret. His portrayal as the kid who is curious to fix broken things while longing to solve the mystery associated with the automaton is absolutely brilliant. Ben Kingsley’s performance as the pioneering French filmmaker Georges Melies is beautiful. He portrays the emotions to perfection.  Chloë Grace Moretz is lively as Isabelle. The chemistry between her and Hugo is entrancing. Every other actor is perfect in their respective roles. It is, I believe, one of the best ensemble cast in a film in recent times.

On the technical front, Hugo is a magnum opus (5 Oscars prove it: Best Cinematography, Best Art Direction, Best Visual Effects, Best Sound Mixing, and Best Sound Editing). Music by Howard Shore might not be that great, but the sound mixing was awesome. Cinematography by Robert Richardson was without doubt the finest work I’ve seen so far. The breathtaking opening shot of Paris, zooming into the railway station, moving in between the passengers on the platform and finally swooping up into the clock chambers setting onto Hugo is by far the best shot I’ve seen in any form of world cinema. Magnificent!! Editing by Thelma Schoonmaker is the only privative (I am inspired by Isabelle) of the entire film. A little over two hours, the film seemed long, and had some, I wouldn’t call them dull, but slow moments which could have easily made the cut. Art Direction by Dante Ferretti and Francesca Lo Schiavo is splendid. The 3D effects are fluid and flawless.

Overall, Hugo is an epic masterpiece expertly crafted by one of the finest directors of our time. It might be a little too long, but the heart wrenching tale of the twelve-year-old hooks you to  your seat and makes you a part his adventure. It’s a film with a message, one which tells you that you have a purpose in this world, one which tells you never to stop chasing your dreams. I am inspired, and hope you will be too. Go watch it!!