After watching Hugo with a couple of friends at Inox, we walked into the food court at GVK One for a quick meal. Having heard and read about Sizzling Joe,  I wanted to give it a try. I wasn’t expecting anything great for one of my friend had a horrible experience with them recently. I should have listened to him and stayed way from it. Alas!!

Since there were only three vegetarian sizzler to choose from, it was an easy choice. I picked the Corn Cheese Shaslik sizzler, which was supposed to be soft cottage cheese and corn balls, fried and skewered with onion and capsicum, served on rice loaded with sour garlic sauce. I asked the guy at the counter if I could get it without the capsicum, and he tells me there is no capsicum in this sizzler. Hmmm… The 175 bucks sizzler got billed for Rs. 200 including taxes. Awesome!!

We sat at one of the tables waiting for our food. One of my friend had ordered a Fusilli Pasta in Pesto sauce from these guys, which was served first. 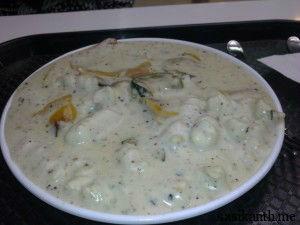 First off, for 150 bucks, the quantity seemed very less. Next, it tasted more like Alfredo sauce than Pesto. And then, it was served cold. My friend thought it was alright, and ate it without complaining. 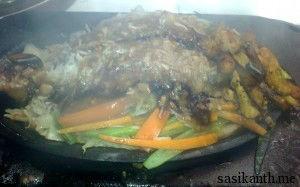 And then came my sizzler. Again, the quantity seemed very less. The French Fries were soggy, and they were barely any vegetables on the plate. Forget capsicum, there were no onions as well. I started off with the rice on top, covered with the mentioned sour garlic sauce which barely had any taste and was bland. The rice was under-cooked too. And then, to my horror, I see a sharp something sticking out in the rice. 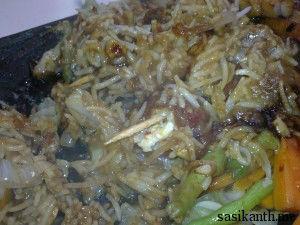 The Cottage Cheese and Corn balls were placed under the rice skewered into two long, sharp toothpicks. There was no way I could get it out of the plate without getting my hands dirty. The balls tasted alright, and the rice tasted better with them, but overall, the experience was horrible. The sizzler was the worst I’ve had so far.

Overall, a horrendous meal. If it were another day, I would have complained about the sizzler to the management, but having enjoyed an awesome movie, I was in no mood to do so tonight. The guy at the counter too seemed like a loser, for he was swearing at someone else while I was placing my order. For the price, the quantity seemed minimal, and the taste was pathetic. It’s one of the worst restaurant experiences.

My other friend had a South Indian Special Thali from the Gongura counter. 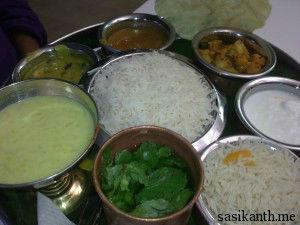 It looked good, and apparently even tasted good. I’m sure it was way better than a Sizzling Joe sizzler!!