On a fine evening, me and my friend were travelling towards Begumpet. We happened to be really hungry, and stopped at this Dhaba Ive been wanting to visit for a while. Its a small place, right on the main road. Walking in, it looked alright and was not crowded. The decors seemed ok, and tables were fine. And so, we were ready to hog.

Firstly, I noticed that the prices were pretty reasonable and comparable to my favorite Santosh Dhaba. We ordered Rani Kofta, a Garlic Naan, Stuffed Kulcha and Kaju Biryani. 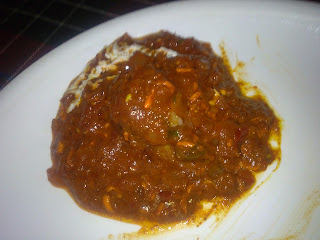 There was only one waiter serving about 4 tables and it took forever for the order to arrive. We were getting really impatient and I was on the verge on screaming at the guy when food was finally served. The Kofta looked good, but seemed less in quantity. It was empty in just one serving for each of us. The gravy was thick and really tasty, but the Kofta ball was a little raw. 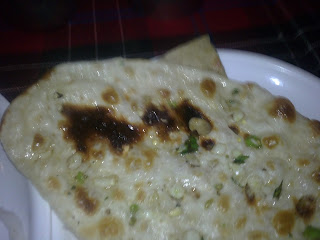 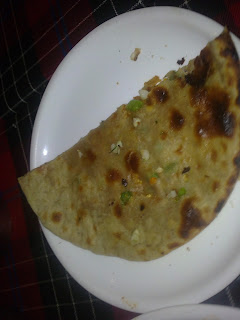 I’ve never tasted Garlic Naan before, but I thought that this one was pretty good. It was well baked, had chunks of garlic to give a good flavor. On the other hand, the Stuffed Paratha was a big disappointment. It wasn’t stuffed properly and was under cooked.

Next came the Kaju Biryani.  And it turned out to be really good. I was disappointed that there were not many cashew nuts, but the masala was really tasty and spicy. The quantity served was also really good. A happy ending to an average meal. (I thought it was little overpriced at Rs. 150/-)

Overall, a decent place with decent food. The service wasn’t too great, and neither was the ambiance. Every time the door opened, the place was close to rattling because of the traffic outside. I still prefer Santosh Dhaba, especially for their super fast service. But a change is good once in a while, and this place fits the bill.