Amma and I were planning to hog on Onasadhya on Onam for about a week. We couldn’t eat at the restaurant, so instead brought parcel. I did read that this place is small does not have great ambiance, but on Onam, it was jam packed. I had to wait for more than 30 minutes to get my parcel.

The food turned out to be great though. The Sadhya had 17 items (I believe one item was missing). I am not fully aware of the items served, so Il skip that part. It was served with brown rice. I and amma struggled to finish one meal. I initially felt that it was too expensive, but later realized that the price was justified. I was really impressed with the food and decided to give the place another try, this time for regular mallu food.

So here I was again 3 days later, this time for dinner with mom and dad. It is on the first floor of an apartment building, on the lane next to Karvy office. As mentioned, it’s a small place with so so ambiance. It is basically an apartment turned into a restaurant. From the looks of it, it seemed like a famous food joint for nearby office crowd (lunch) and non-veg eaters. It wasn’t packed for dinner though.

As expected, there was nothing much vegetarian on the menu, except for Appam, Idiappam, Porotta, etc., and a couple of wet dishes like Stew, Veg. Korma, Channa Masala and Mushroom Masala. The Appams and Porottas were reasonably priced, but the rest seemed to be a little expensive. Anyways, we ordered Appam with Veg. Stew, and Porotta with Channa Masala (I wanted to order Veg Korma, but the guy suggested Channa Masala). 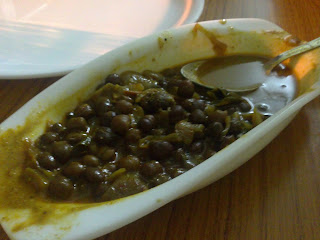 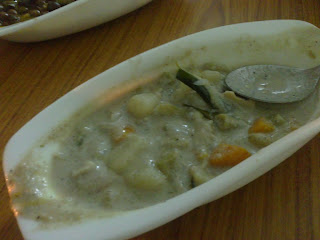 It took about 10 minutes for the items to be served. Weirdly, the Stew and Channa Masala were served first without the Appams or Porottas. The Appams were cooked at a live counter at the other end of the restaurant. The Stew smelt really good and tasted excellent. It was a little sweet and I could make out that it was made of fresh coconut milk. The Appams were very good. The Channa Masala was a little disappointing though. It was made with black channa, and was a little thin. The Porottas were the best I have had in twin cities. They were amazingly good, and I immediately ordered for another one. 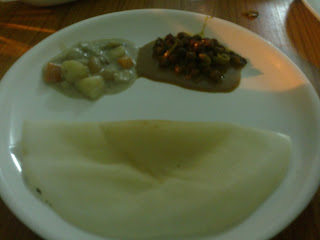 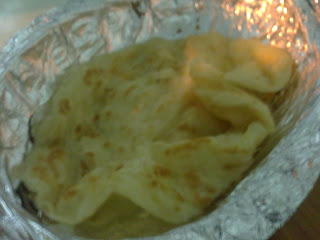 We did order Idiappams and a Chapati later on. The Chapati turned out to be really soft, while the Idiappams were cold and were not so great.

Overall, we were satisfied with the food. And it went easy on the pocket as well. A little better ambience, and better service could have made this a great experience, but it was good one nevertheless. From the menu, and as expected, this place should be a feast for any non vegetarian. For my vegetarian friends, as long as you don’t mind beef and fish being served around you, this is a place you should try. As I said, their Porottas are the best I have had so far!