For dinner on my brother’s birthday, it was a choice between Siaa in Jubilee Hills and Sahib Sindh Sultan. We decided on the latter, called and made a reservation. We dropped in on time and were cordially guided to our table. The place is designed like a railway station with a train compartment on it. The compartment is very bright with tables for four, while the station  is dimly lit with a rustic touch to it. We were seated inside the compartment, whose interiors very well done. It almost felt like we were inside a train, but for the movement.

We started off with some mocktails. I had a Holiday Isle (Peach juice with Vanilla Ice-cream), mom had a Sindh Tandai (milk and crushed almonds, flavored with saffron and cardamom), and my bro had a Sahib Ka Panna (ripe pineapple roasted on charcoal pulped and combined with cumin). Dad had a cocktail.

My mocktail was creamy and alright, but it wasn’t cold. The Badam milk was excellent and the Panna was decent, but nothing great. 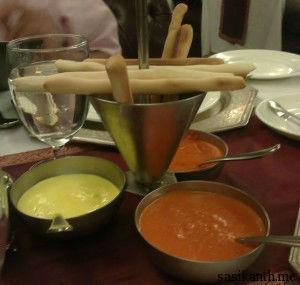 While we enjoyed our drinks, bread-sticks were served with three types of chutneys/sauces.

For starters, we ordered Gul Gulshan Aur Gulfam Ke Paneer (Mildy spiced paneer decked with green peas, mushroom and dry fruits, char grilled). For the second starter, the waiter suggested we try the Makai Motia Seekh (Soft vegetable seekh kabab with paneer and sweet corn niblets). We were informed that it would take a while for the food to be served while placing the order. 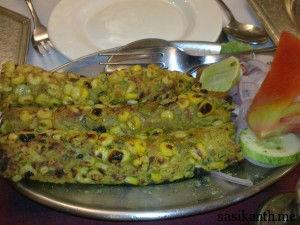 After about 15 minutes, the kababs were served. They looked delicious and tasted delicious. Served with mint chutney, they were as good as the kababs we recently had at Rubaiyat. 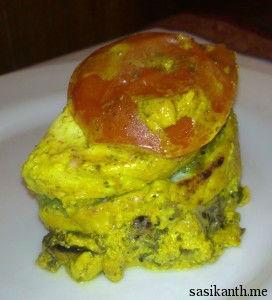 The other starter was served soon. The paneer was very soft and fresh, and tasted yum along  with the stuffing in between. I couldn’t taste any dry fruits, but it didn’t matter.

We took our time to decide on the main course and finally ordered Palak Malai Kofta (Soft malai koftas stewed in a gravy of cooked spinach and nutmeg) and Pista Kaju Aur Badam (Pista, kaju and badam simmered in a gravy of onions and tomatoes with spices) along with portions of Malai Reshmi Paratha, Pudina Paratha, Methi Paratha and Stuffed Kulcha. For rice, we ordered Aloo Aur Wadi Ki Tehri (Amritsari wadi and potatoes combined with basmati rice). 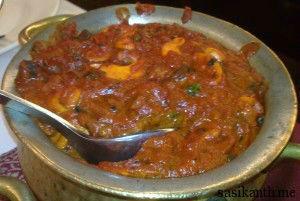 The Pista Kaju Aur Badam, their specialty dish for vegetarians, was excellent. Though the tomato onion gravy was spicy, the nuts gave it a slight sweet taste, and on the whole, it was delightful. 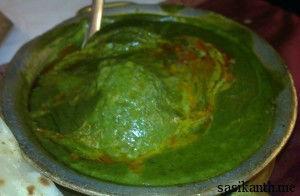 The Kofta too was delicious. The palak gravy was creamy and sapid, and the kofta balls were a little hard, but still good.

The rotis here are one of the best I’ve had in town. The Malai Reshmi Paratha was as soft as butter and melted in my mouth. The Masala Kulcha, though not heavily stuffed, was very soft. The other two parathas were pretty good as well.

Like other places I’ve been to recently, the biryani was a little disappointing. The waiter did mention that the wadi, or the pakoras would be smoked, but we thought they were smoked to the extreme. It was good, but after having some delicious stuff, this didn’t match our expectations.

Overall, a sumptuous, yummy meal. We were so stuffed towards the end that we didn’t have any place left even for the paan. The quantity of food served was pretty decent, but being a fancy restaurant, the prices were pretty fat. I thought the drinks were not worth the money, but the rest of the food, probably barring the biryani was excellent. Though the ambiance, the royal service, and the yummy food partly justify the prices, it’s not a restaurant for fortnightly visits, but one for special occasions.