Dropped into Shanbhag last week with my brother for dinner. As already stated in my last review, this is one of my favorite restaurants in town, and their Ghee Rice is the best. The place was a little more crowded than the last time around, and we made ourselves comfy in a corner.

We planned to order a couple of curries and Ghee Rice, but ended up ordered their North-Indian Thali, which came with Tomato Soup, Paneer Butter Masala, Gobi Masala, Rajma, Dal, Pulao, Rice (all unlimited), 2 Roti or 8 Poori’s, Raitha, Curd, Gulab Jamoon and Ice-cream. It had a been a long time since we last had one here. 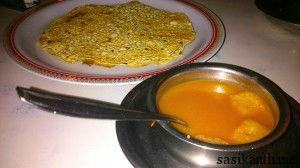 The Tomato Soup was served along with Masala Papad. Their soup is usually very good, and today was no different. It had a nice sweet and sour tomatoey taste to it. 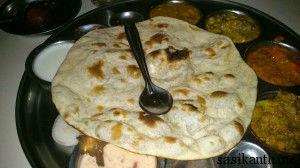 The Thali was served pretty soon, and of the curries, the Paneer Butter Masala was the best. The paneer was very fresh, and almost melt in my mouth, while the gravy was just yum. The Gobi Masala was equally good, while the Rajma was alright. The Dal was tasty as well. All the curries were served as per our requirement. The Roti was soft and good. 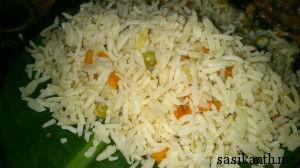 The Pulao had a nice flavor and tasted pretty good. I could feel the ghee in it.

Overall, an awesome meal. For a North-Indian Thali, it didn’t have the unnecessary Rasam, Sambar and other South-Indian stuff. The curries were yum, and the pulao was decent. For the price, it was actually worth every penny. The service was very good, and reminded me of Rajdhani, for they were pampering us to eat more. The ambiance is decent, but the tables are placed pretty closed to each other, which made it quite uncomfortable. But otherwise, nice service, great price, and more importantly, awesome food!