I last reviewed this place 3 years ago (review). Since then, a lot has changed in Hyderabad. But there are still a few places which serve pretty good food at reasonable prices, and Swathi remains one of them. Was passing by Mehdipatnam last week, and decided to pack some yummy food.

I ordered a Kaju Masala, Butter Naan and Vegetable Biryani. It took forever for the food to be packed and I was starting to get restless while my food was finally ready. 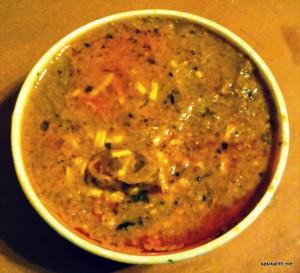 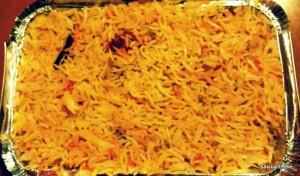 Their Biryani used to be pretty good and I was hoping that it’d be the same. Stuffed with curry under the rice, it’s similar to Bombay style Biryani. While it still tasted good even this time around, it also was pretty spicy. Looks like the chef was trying to get rid of all the chilli in the kitchen.

Overall a decent meal, but for the spice. Both the Kaju Masala and Biryani would have been excellent if they had gone easy on the chilli. The service, while I was waiting for my food, seemed bad with waiters getting into arguments with customers. The place always had mediocre ambiance and it hasn’t improved over time. So opt for an take-away. Give it a shot if you haven’t already, and make sure you ask your food to be less spicy.

A couple of days later, happened to pass by Raj Bhavan road and decided to pack some dinner for me and amma. This place looks almost similar to the one at Mehdipatnam (almost all Swathi’s look the same), and has small seating area in the basement. Ambiance is also very similar, a basic tiffin center.

I ordered the same food as a couple of days ago, mainly to compare tastes: Kaju Masala, Butter Naan and Special Vegetable Biryani. The food was prepared pretty quick, and I was on my way home in about 10 minutes. 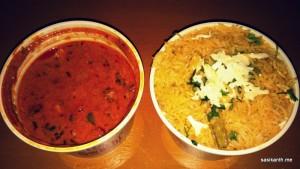 The Kaju Masala looked a little different from the one at the other place, and was much less in quantity. The gravy was pretty tasty but apart from cashew, it was full of finely chopped capsicum pieces (I hate it when restaurants do that for I hate capsicum, and I had to pick them out before I hogged). The Naan was decent, but not the best.

There was nothing so special about the vegetable biryani, but it was decent nevertheless. It actually tasted yum with the gravy served along.

Overall a decent meal. Both the restaurants had different tastes, and had their own merits. The best part of Swathi is the pocket friendly prices. The taste too is pretty good, and so is the quantity. They might not be fine dine restaurants, but do give the take-away a try.