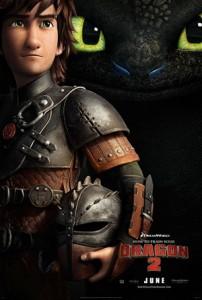 How To Train Your Dragon was a really cute movie and I really liked the 2010 film, so I was really excited about the sequel. While not as cute as the first, it’s still a good film nevertheless.

Directed by Dean DeBlois who co-directed the first movie, this one has Hiccup all grown up, trying to explore and find new worlds. What awaits him is a big surprise, and towards the end, a challenge against his best companion. Compared to the first, I thought too much was happening on the screen at a given instant in this one. While direction is neat, I thought it could have been better. The emotions towards the climax also could have been handled way better for everything happened so fast.

Music by John Powell is a definite asset to the film apart from the cinematography by Roger Deakins. The colors are brilliant and the 3D effects are good, but could have been better.

Is it worth your time and money??: If you loved the first film, you’re sure to love this too, but it just seemed a lot. Still worth a watch!

Worth mention: The scene where Toothless fights Alpha.