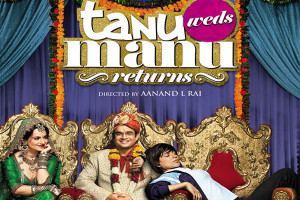 Kangana is one of the most versatile actors we have in the industry today, and she proved her mettle with Queen. Now, she does it again in Tanu Weds Manu: Returns.

Anand Rai’s sequel starts off with Manu landing in a mental asylum because of domestic problems four years post their wedding. Tanu goes back to being herself in Kanpur, while Manu, out of the asylum, is still brooding over Tanu in Delhi. Things change when Manu runs into Kusum, a Haryanvi doppelgänger of Tanu. While the first few minutes of the movie seem ridiculous, Anand does a commendable job on direction front. Himanshu Sharma’s dialogues are witty and the screenplay is decent. The woman empowerment speech was very well conceived. However, the movie starts to drag towards the climax, and the ending is too predictable.

Kangana is brilliant being herself as Tanu, while she does a perfect job as Kusum. Her Haryanvi accent is as good as a local; it was really difficult for me to understand most of it at times. She might walk away with honours again this year for her performance. Madhavan is flawless as the 40 years old initially struggling with his over-hyper wife, and later as the guy yearning for her attention. Deepak Dobriyal overacts, while Jimmy comes up with a subdued performance.

Music by Krsna Solo and Tanishk-Vayu is alright, with ‘Banno’ being the best of the lot. Cinematography by Chirantan Das is worth a mention, while editing by Hemal Kothari is neat.

Is it worth your time and money??: Tanu Weds Manu: Returns isn’t a great movie. But it still works thanks to another exceptional performance  from Kangana. Baring some flaws in the script and the very predictable ending, it’s still worth a watch.

Worth mention: Kangana’s performance as Kusum in the climax, and Rajesh Sharma’s speech on women empowerment.