Vasanta Bhavan has been a new addition to the vegetarian restaurants serving authentic South Indian dishes. Though it’s been a while since this restaurant opened, it was not till a couple of months ago did we drop in, twice in a month. The restaurant is pretty huge, and well done with a traditional touch to it.

On our first outing, we ordered Pongal, Ghee Dry Fruit Rawa Dosa and Chilli Parotta. We also ordered a portion of Shanghai Rolls. We enquired about the Thali and were told it isn’t served for dinner. 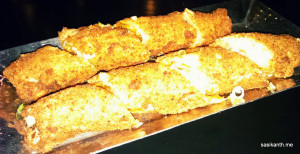 The Shanghai Rolls were kinda oily and rolled up pretty thick. The stuffing however tasted decent. Not a great start to the meal though. 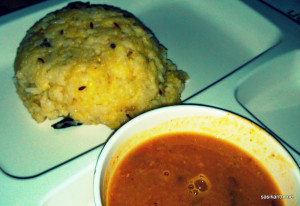 For 125 bucks, the quantity of Pongal served seemed meagre. On taste front, it was just alright, nothing spectacular.

The Rawa Dosa was even more disappointing. It wasn’t roasted properly and there were barely any dry fruits. The Sambar was decent. 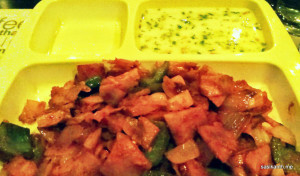 The Chilly Parota was served with Raitha, and I had to request the waiter twice to get some korma. Parota tasted alright, but was also a little too spicy for my liking.

Overall, our first meal wasn’t really worthwhile. Nevertheless, wanting to give them another chance, we dropped in again a few days later for lunch. This time we ordered a Sambar Rice, a South Indian and a North Indian thali. 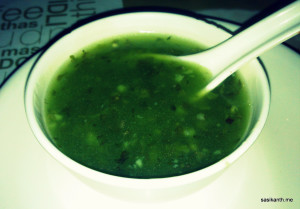 Unlike most North Indian Thali, this one came with Pudina Soup which turned out to be excellent. Amma actually loved it. 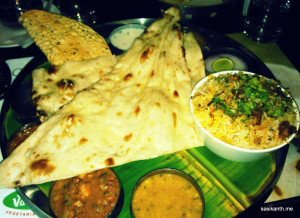 The thali had Butter Naan, Paneer Butter Masala, Channa Masala, Mixed Vegetable, Dal, a bowl of Biryani, and sweet. The Naan was soft, and all the curries were delicious, with PBM being the best of the lot. The biryani too was appetizing.

The South Indian thali and the Sambar Rice were also pretty good. While our last experience wasn’t fruitful, this time we were satisfied on food front.

But wait, this wasn’t it. While the service on our first visit was passable, this time it turned out to be atrocious. On a Sunday afternoon, when the restaurant was packed, their air conditioning wasn’t working. We were sweating like crazy, and not one guy was responding when we were enquiring about the situation. Almost every waiter had an attitude, and I happened to lose it when I caught one sneering my dad at the counter. Air conditioning not working is acceptable, but you definitely can’t have people walking carelessly around the restaurant, with a sneering attitude.

The manager offered a discount on the bill when I brought this to his notice, but this ain’t the solution. We came in the second time wanting to give the restaurant another chance, and while the food was good, I don’t think I’m ever coming back to this place; not in the near future at least.