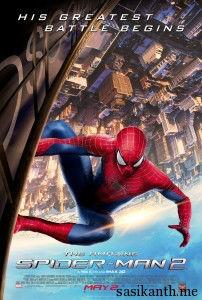 Directed by Marc Webb, I thought this film was much better than it’s prequel for it has an improved storyline. Scripted again by James Vanderbilt (and a few others), this one has more structure to it. Though our Spidey still seemed like a boy with a new toy, there is some maturity to his role. He’s torn between his love and responsibilities, and this has been very well conceived. While the direction is pretty good, and the screenplay (Alex Kurtzman, Roberto Orci and Jeff Pinkner) is much improved, I felt the film was too long and had too many characters. Given that the movie was this long anyways, it would have been nice to establish Harry and Peter’s friendship in a better manner as it all seemed very contrived. At close to 150 minutes, I kinda lost track on how the movie had started for there was so much happening!

Andrew Garfield has a more meaty role in this film, and he does not disappoint. I thought he performed well during the climax. However, I believe he makes Spider-Man more cheeky than required, and does not carry the innocence Tobey Maguire brought to plate. Emma Stone is pretty good as Spidey’s love interest, and so is Jamie Foxx as the main antagonist Electro. Dane DeHaan (Harry/Green Goblin) was just ok.

One of the major plus points of this film is some excellent background score by Hans Zimmer. Add to that some amazing sound-mixing, and we have a winner. I really enjoyed the sound effects along with some amazing visuals and 3D effects. Cinematography by Daniel Mindel is of top-notch quality. Editing by Pietro Scalia and Elliot Graham could have been better, but then the script had too much to offer, so I’m guessing there was little they could do.

Is it worth your time and money??: Definitely. It’s a fun film with a lot happening. You can give it a watch just for its grand visuals, but the story is equally good. The only negative aspect is the length, and maybe (at times) heavy fight sequences. Nevertheless, if you can sit through for 142 minutes and love action, you are in for some Amazing entertainment!

Worth mention: The climax fight between Spider-Man and Electro was quite a scene. And also the final fight with Rhino.

PS: X-Men fans are in for some goodies during closing-credits, so stay put.

It was disappointing not to watch the movie in IMAX 3D (Prasads, you…).