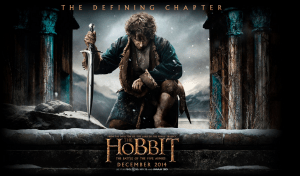 While the first instalment, An Unexpected Journey, of the series wasn’t great, the second part, The Desolation of Smaug, was a better movie. While I was hoping for an excellent end to the series (like the third movie in the LOR series), The Hobbit: The Battle of the Five Armies ended up being more like the first movie – ordinary.

The movie continues from where it left off, with Smaug attacking Lake Town. The Dragon Slayer saves the day and the town, but the battle has just began with every army converging and fighting for the Lonely Mountain. This battle seemed a little too long and at times artificial. Nevetheless, things pic up towards the latter half with Thorin’s battle against Azog and Legolas fighting Blog piquing your interest. Direction by Peter Jackson is neat but the screenplay wasn’t as interesting as the second film.

On acting front, this movie provides every character to showcase their talent and almost everyone performs to their best. Ian McKellen does a good job as expected, while Luke Evans is impressive. Evangeline Lilly still looked odd as Tauriel but comes up with a decent act. The Hobbit (Martin Freeman) puts up a fine performance.

Music and background score by Howard Shore is alright, and so is editing by Jabez Olssen. While the graphics still seemed artificial at times, they were better than the previous two films. Cinematography by Andrew Lesnie is pretty good.

Is it worth your time and money??: While not as engrossing as The Desolation of Smaug, The Battle of the Five Armies is a decent watch. Let’s hope it all ends here.