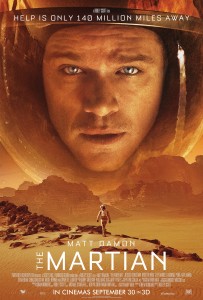 America has spent a lot on getting Matt Damon back; we first had Saving Private Ryan, then Interstellar, and now The Martian. Why don’t they reach out to his look-alike Mark Wahlberg instead? 😛

Directed by Ridley Scott, who’s worked a set of duds in the recent past, The Martian is a movie about getting an astronaut who is incorrectly presumed dead and left behind on the planet Mars back to Earth. While I have not read Andy Weir’s novel, I thought the screenplay by  Drew Goddard was pretty weak. With the entire story line being revealed in the trailer, there wasn’t anything gripping showcased on-screen. There were also a few episodes which weren’t stitched well into the movie, and there was no effort made on establishing any characters including Matt Damon’s; he’s left on Mars, and everyone’s trying to get him back – where’s the substance and/or emotion? While the direction is alright, there were no moments of awe. Too much drama towards the climax doesn’t help either.

Matt Damon is very good in the lead role. He has put in a lot of effort to groom himself for the role, and it shows on-screen. While it might not be an Academy Award winning performance, it’s still a commendable one. Chiwetel Ejiofor is good and so is Jeff Daniels. While the rest of the cast has big names, no one stands out for they all seemed liked pawns in a game of chess – actors without character.

Music by Harry Gregson-Williams is nothing great. Use of old disco songs seemed too monotonous after a while. Editing by Pietro Scalia could have been better. Cinematography by Dariusz Wolski is good.

Is it worth your time and money?: If too much wasn’t revealed in the trailer, The Martian would probably have had more impact on the audience. Even otherwise, the weak screenplay and average direction make this an average flick.

Worth mention: Acting by Matt Damon.

One thought on “The Martian | Movie Review”