Having read good reviews about this tiffin place, I was eager to try it out. Since it’s located near my house, I asked dad to bring a Dosa for breakfast on a particular day. These guys boast of more than 50 varieties of Dosa, but I first wanted to try the simplest, Masala Dosa. While I was expecting something yum, it turned out to be pretty ordinary and left me unimpressed. The chutneys and sambar too weren’t great.

On another occasion, we brought in Aloo Paratha, Chapati and Dum Biryani for dinner. The Chapatis, which were served with two kinds of curries, were pretty good. However, the curries weren’t great. One of them had too much pudina which made it really strong, while the other had less salt. The Biryani turned out to be coloured rice with loads and loads of garam masala and no taste, an utter disappointment. Aloo Paratha turned out to be  saving grace for they were soft and palatable.

Wanting to give it another chance, I decided to dine at the place. Walking in, I was pissed by the cashiers rude attitude, who turned nice after I ordered a something worth was 80 bucks. Anyhow, I ordered for a Chinese Combo which was ready in about 10 minutes. 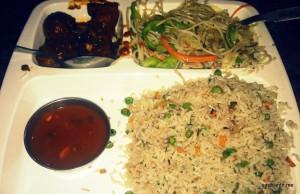 The combo had four pieces of Manchuria, some Noodles and Fried Rice. The Manchuria was soft and alright but the gravy had too much garlic. The Noodles were tasty but were dripping in oil and the Fried Rice lacked flavour. It’s then I realized that the bandi wala next door serves better Chinese food than these guys.

Overall, mediocre experiences. Like mentioned in few reviews, there were no neatly dressed attendants and neither the hygiene of the place worth mention. The entire place was in fact very muddy on the day I dropped in. Add to that the arrogance of the cashier. I don’t think I’m ever coming back to this place, even for a take away any more.