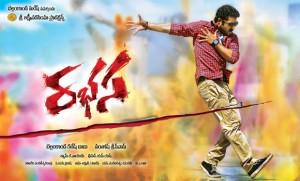 What happens when you pick up story lines from a bunch of movies and make a pot-pourri? You get a boring Rabhasa!

I never got to watch Santosh Srinivas’s first film Kandireega. By the looks of it, it must have been a better film for he actually got chance to direct another with the same producer. The problem actually is not with the director, but the script. Rabhasa offers nothing new: a young man fighting not for his love, but for his family. The only twist here is that he’s fighting for some stranger’s family reunion. To add value Santosh tried to twist the screenplay, but that doesn’t work well. Add to that innumerable number of uncanny fights, and there you go, another boring film aimed only for the masses. While direction is good in parts, it’s mediocre for most of the film.

NTR, who finally gets a release after a long time, is perfect to play the lead. But the problem is that you’ve already seen him play similar character in the past. So it’s a cake walk for him, but his choice of doing same roles baffles me. While he looks slim and fit in few scenes, he needs to lose weight (again). Samantha has a full fetched role and she’s alright (but for in few scenes). She looked really glamorous. Pranitha has a small role to play and doesn’t make an impact. I was surprised by the number of negative characters in the movie. While everyone starts off strong, they all end up being pussies with no one making an impact. Bramhanadam entertains in the second half, but again it’s the same old bakra character.

Music by Thaman is, as my cousin puts it, same-to-same. But for ‘Rakasi Rakasi’, you’ve heard every other tune in the past (just like you’ve watched most scenes of this film somewhere). Editing by Venkateswara Rao is alright. Cinematography by Shyam Naidu is pretty good. However, the graphics could have been better. You expect good dances in an NTR movie, but there was nothing on offer.

Is it worth your time and money??: Unless you are a fan, you can probably give this one a miss – not because it’s a bad film, but since you’ve already seen most of this in the past. NTR is a definite asset to the film, but I am not sure if people want to see him play the same roles again and again.

Worth mention: Cinematography. And to an extent, Bramhanadam’s episodes.