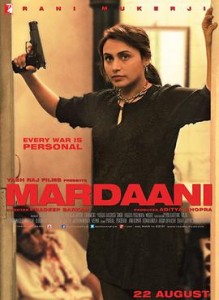 Rani Mukerji is definitely one of the best actors of this age and has enough talent to carry a movie on her shoulders. However, even she can’t do much when the script is meek and too predictable.

After four years of hiatus, director Pradeep Sarkar is back with another female oriented movie. Parineeta was a path breaking debut for both Vidya and Pradeep. While Vidya proved her mettle with every film thereafter, he failed to make an impact. And now, he’s back with his fourth feature Mardaani which has its heart at the right place, but unfortunately lacks the punch.

Inspector Shivani (Rani) plays a blatant crime branch cop trying to nab a child sex trafficking racket in this two-hour crime drama. While Rani does justice to her role, the circumstances in which she does them seem too contrived. Emotions seem muted, therefore episodes which are supposed to make your tummy churn seem like run of the mill stuff. And though the scenes between Rani and her antagonist are well conceived, it all results in a boring climax face off. While screenplay is pretty decent, the direction is pretty mediocre.

If it weren’t for Rani, a movie like this would/could have gone totally unnoticed. While she brings charm and adds flare to the film, the weak script fails her. However, she needs to be commended for her effort. Tahir Bhasin  is very good as her counterpart and has a bright future. The rest of the cast is alright.

Music and background score by Salim-Sulaiman is pretty decent. Editing by Sanjib Dutta is neat and cinematography by Artur Zurawski is very good.

Is it worth your time and money??: It’s not a bad film, no. Nevertheless it could have been so much better. But for Rani, there is nothing special the movie has to offer. Watch it only for her.

Worth mention: Rani all the way!