Me and my friend were’t really hungry and wanted to eat something light. I remembered this small dhaba I once saw on DK Road in Ameerpet and decided to give it a try. It’s a small joint, something similar to an Irani cafe. At about 10:00 PM, the place was pretty much empty. The place didn’t look so clean, but we decided to give it a shot anyways.

The menu looked quite similar to the ones I saw in Mumbai. They serve everything, right from Chaat to Pav Bhaji, Burgers, Pizzas, to Noodles and Fried Rice apart from their North-Indian dishes. The best part is that they offer full or single of almost every dish, which is perfect if you’re visiting alone, or if you want to try out different items. This day, we ordered a full of Kaju Paneer Masala and Aloo Paratha. We wanted to try Stuffed Kulcha, but they were done for the day. 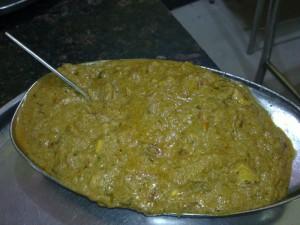 The curry was served within minutes of order, even before the parathas were served. The quantity looked pretty alright and the curry tasted good. The paneer though was’t so fresh. The masala was more of regular kurma, with kaju and paneer in it to make it Kaju Paneer Masala. 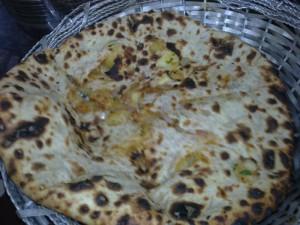 The Aloo Paratha was excellent. Its one of the best paratha I have eaten outside, and reminded me of the ones my Didi makes. They were pretty huge, and the stuffing was excellent. I felt that it had a little more lime juice in it than required, but still good. They actually didn’t need a curry to be eaten with. With some dahi, they would have been perfect.

We were pretty much stuffed with a single paratha each, but we ordered a Tandoori roti to finish the curry. It was huge, soft and really good as well. 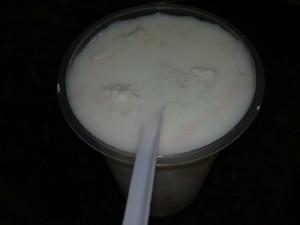 Though I am on a diet, I couldn’t stop the temptation, and so ordered a special dry fruit Lassi. It had chunks of malai in it and was yummy.

Overall, a pretty decent meal for the price we paid. Though we ordered a full curry, we were charged for half (I don’t know whether if it was a mistake or if what we were served was really a half). The ambiance and the place is not so great, but with the food they serve, you might want to try this place.

Not satisfied with the place, I returned the very next day to order some take away for dinner (Another reason for coming back was that I forgot the name of the place :P). I was promptly greeted by the server who attended our table the previous night. I asked him for suggestions with curries, and he was suggesting exactly the opposite of what I was looking for.

Finally, I ordered a half of Malai Kofta, half of Kaju Paneer with Fried Rice (combo) and two Tandoori Rotis. It took about ten minutes, and I was away with my order.

I came home and was surprised to find plain gravy in the place of Kaju Paneer. I was actually cursing him for serving me something like that. Quantity of the gravy served was also quite less. The Malai Kofta’s quantity was alright, and it had quite a few chunks of paneer in it apart from the koftas. It tasted good, quite similar to the gravy last night, but the koftas were kinda hard. (I am tired of places serving hard koftas!!). The Tandoori Rotis became cold, and were saggy.

Next I open the rice packet hoping to find Fried Rice, but instead I find Kaju Jeera Rice. That’s when I realized that the waiter mistook my order and parceled Kaju Jeera Rice instead of Kaju Paneer with Fried Rice, and that is why there were no kaju or paneer in the gravy. The Jeera Rice was alright, the basic stuff, with chunks of Kaju in it (not a lot though).

I so wanted to have Biryani (they apparently are famous for their Dum Biryani), but ended up having Jeera Rice. Anyways, a decent meal. There was more than half of the Kofta curry left at the end of my meal. My excitement to retry this place within the span of a day though was totaled. I was hoping for an excellent meal, but was only partly satisfied.