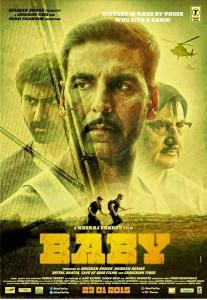 The Wednesday was a brilliant film, while Special 26 was a good watch. Come Baby, Neeraj Pandey seems to have got lost in the world of big budget Bollywood movies. One would expect something more sensible from him.

Director Neeraj Pandey’s Baby has nothing new to offer. Like most of the thrillers, Baby starts off with an episode where the our hero, a secret intelligence officer, saves the day by fighting tons of goons all by himself. Thanks to the big budget, this happens in Istanbul. Next we are told that there’s a bigger terrorist attack planned, and our hero and his team need to fight more goons (all from the neighbouring country). They first go to Nepal, and then to Saudi Arabia. Forget Hollywood, the same plot has been used in so many Hindi movies till date. Even the screenplay has nothing new in store; in fact, its at times stupid and illogical. The only plus point of this otherwise predictable and long movie are its witty dialogues. Pandey also succeeds in inserting humour in some episodes. These apart, Pandey disappoints big time (given the expectations). Direction actually is way below par, especially in the first 30 odd minutes.

Akshay Kumar shines in one of the sensible roles he’s played in recent times. While he looks good with a moustache, it could have been better groomed (for it looked more like a sticker on his face). Danny Denzongpa does a good job as the mission head. Rana and Taapsee have minimal screen presence (about 10 minutes each), and while Tapsee does a perfect job, Rana was expressionless. Anupam Kher entertains in a small role, and so does Murali Sharma. The guy who played the Maulana, Rasheed Naz, did good.

There’s only half a song in the movie (apart from the end-credit song), and both of them are decent. Background score is neat. Cinematography by Suddep Chatterjee is good. Editing by Narayan Singh could have been better. For a thriller, the movie was a little too long. Also, the second half being twice as long as the first doesn’t help in engaging the audience.

Is it worth your time and money??: Baby isn’t really a bad watch. But at the same time, it doesn’t match up to your expectations either. While the actors are a plus point, the mediocre screenplay and direction play spoilsport. Give it a watch only if you have nothing better to do. Actually, walk in without any expectations, and you might actually enjoy it.

Worth mention: Acting and cinematography.

PS: It was funny to watch Akshay signalling a guy on the street to not to look into the camera (or at him) while in a shot. What the *beep* was the director doing?? :O