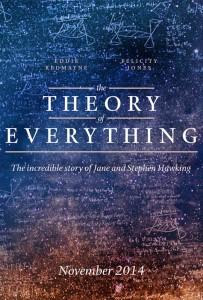 It is not often that you have two biopics releasing together – both British (one about a mathematician and other a physicist), both nominated for the Oscars. While The Imitation Game is a dramatized thriller about Alan Turing and his achievements, The Theory of Everything is a drama about Stephen Hawking’s personal life.

Based upon the book written by Jane Wilde (Hawking’s first wife), the movie happens to be more about the couple’s relationship rather than the physicists achievements. It starts of with a young Hawking meeting Jane a little before he was diagnosed with motor neurone disease, and continues with their struggles as a married couple, while Hawking pursued research on quantum mechanics through deteriorating health conditions. While the love story is  well picturized, director James Marsh could not maintain the same zeal for the rest of the story. Beyond a point, the relationship between the couple seemed artificial. The screenplay is neat, but only if the story had much more substance to offer. Even worse, it doesn’t even connect with you emotionally.

Eddie Redmayne is brilliant as Hawking. He resembles Hawking in looks, and portrays the medical condition to perfection. While he has not much to say, he conveys a lot through his facial expressions. Felicity Jones puts up an equally good performance as Jane. David Thewlis and Charlie Cox are good.

Music by Jóhann Jóhannsson is alright. Editing by Jinx Godfrey and cinematography by Benoit Delhomme are good. I actually liked the way the some scenes were presented in retro nostalgic frames.

Is it worth your time and money??: When you compare with the other British biopic, The Theory of Everything lacks enough substance to keep you engrossed for it’s more of a drama than a biopic. While worth a watch for the performances, it really has nothing new to offer.