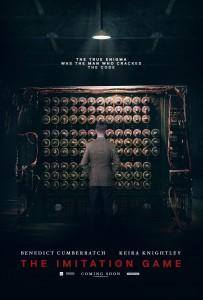 After a long wait, The Imitation Game has finally released in India. Having read some raving reviews about the movie, I walked in with high expectations. While it did live up to most, I somehow felt something was amiss.

Scripted by Graham Moore, The Imitation Game tells the story of Alan Turing, the mathematician who helped the allies win the Second World War using the Turing Machine (Christopher/Bombe). The script has been modified enough to help director Morten Tydlum make the movie gripping; enough drama has been infused into this biopic to make it interesting. However, I felt that there could have been more emotional content. While direction is good, adding a little more substance to the film would have made it better. Nevertheless, the best part of the movie however is its seamless screenplay which runs through three different time periods. Be it the 1940’s or the 1950’s, every frame is stitched together perfectly.

The movie is near perfect thanks to a brilliant act by Benedict Cumberbatch. His performances in a couple of episodes, when he confesses to his fiancée, and when he’s struggling to solve a Crossword puzzle, are superb. Special shout to Alex Lawther who enacts young Turing’s life to the ‘T’. Keira Knightley is perfect as Joan Clarke. The rest of the cast put up credible performances.

Music by Alexandre Desplat is good, but something more haunting would have been perfect. Editing by William Goldenberg is neat while cinematography by Oscar Faura is excellent.

Is it worth your time and money??: It might not be a perfect biopic for it lacks enough emotional quotient, but Benedict Cumberbatch adds so much life to the movie that you can’t afford to miss it. Forget homosexuality and everything else, The Imitation Game is a beautiful story of a man who helped save close to 18 million lives. Must watch.