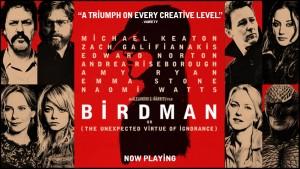 Given that you have a bunch of Oscar nominated films releasing together, it’s tedious to keep track of the one which stands out. While all other nominees are either biographies or dramas, Birdman excels as a dark comedy with some spectacular performances.

It’s very difficult to write about director Alejandro González Iñárritu’s Birdman. A Hollywood actor once famous for playing fictional ‘Birdman’ character is trying to establish himself on Broadway; but he is still haunted and tormented by the voice of Birdman, and the story showcases how this conflict affects his Broadway career. While González Iñárritu brings out the best from the entire cast, the screenplay is spectacular and makes the movie a treat to watch. The way the entire film flows seamlessly while giving an impression that it’s all a single shot is brilliantly done. This is how good it gets on script, screenplay and direction front.

Michael Keaton is superb as the struggling actor. He gets into the skin of the character, and his performance is the best I’ve seen this year (thus far). Edward Norton comes up with an equally spectacular act and actually outshines Keaton in some episodes. Emma Stone is perfect in her brief appearance, and so are Naomi Watts, Andrea Riseborough and Zach Galifianakis. The film is an absolute treat in terms of performances.

Music by Antonio Sánchez is haunting and very effective. Cinematography by Emmanuel Lubezki and editing by Douglas Crise and Stephen Mirrione are excellent. Again, the way the film flows as a single shot thanks to perfect screenplay, editing and cinematography is worth mention.

Is it worth your time and money?: While all the Oscar nominees are excellent films, Birdman happens to be the clear winner for me. It’s a perfect example of the script, director, actors and technical teams all coming together to churn out a work of art. Don’t miss it!!

Worth mention: The performances and the illusion that entire film is a single shot.