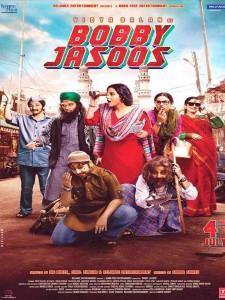 After The Dirty Picture and Kahaani, every movie of Vidya Balan releases with great expectations. While Bobby Jasoos isn’t as pompous or intense as the former two, it is definitely worth your buck!

Bobby is a beloved girl from a Muslim family of our Old City in Hyderabad, who considers herself to be a great detective. While solving a couple of petty cases in her neighborhood, she is called upon by a mysterious man paying big money, to find a couple of missing people. The rest of the story is about who the mysterious man is and whom does he want to be found. Scripted and directed by debutant Samar Shaikh, the story is kept simple and never gets too complicated. Showcasing the nativity of Hyderabad to the maximum, Samar brings out beautiful emotions from all his cast members. Direction is very neat, while the screenplay could have been little better. And ya, there is no real jasoosi in the move but for in the title, a disappointment.

Vidya owns the film big time and looks absolutely gorgeous. With this film, she once again proves that you don’t have to shed your clothes or have a perfect figure to look beautiful. Her expressions and smile in few episodes are priceless. Ali Zafar is great as the male protagonist. He had to downplay quite a bit to let Vidya take center stage, and he does it with ease. Arjan Bajwa is pretty good, while Supriya Pathak and the rest of Bobby’s family are perfect. The guy who played the role of Shetty, Prasad Barve, deserves a mention.

Music and background score by Shantanu Moitra are pretty good. While the first song was welcoming, the song in the second half was more like a speedbreaker to the film’s pace. Editing by Hemal Kothari is neat, and so is the screenplay by Sanyuktha Chawla Shaikh. However, I felt that he could have captured more of Old City grandeur. Samar Sheik also deserves a mention for the dialogues in Hyderabadi slang.

Is it worth your time and money??: Yes. You might have already heard this before on various occasions – go watch the film for an amazing performance by one of the best actors in recent times, Vidya Balan! It’s no great film, but still enjoyable.

Worth mention: The entire episode before and after Ali Zafar talking to his abba jaan, and the message in the climax.