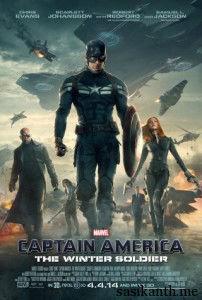 So Captain America kicks off the season of superhero movies this year, and it ain’t a bad start.

Scripted by Christopher Markus and Stephen McFeely, CA: The Winter Soldier relies more or less on the premise set in the CA: The First Avenger, that of Project Hydra (for those who have no idea what that is, I’d suggest you watch the first part). The Russo brothers (Directors) did a commendable job with the given storyline, but for the mediocre screenplay. At two quarter hours, the movie seemed really long because of the slow screenplay, especially during the first half. However, the innumerable number of fight sequences and action episodes keep you glued to your seats.

Chris Rogers is good, while Scarlett Johansson (Black Widow) looked odd at times. Sebastian Stan, Anthony Mackie and Samuel L. Jackson are decent in their respective roles. On technical front, music/score by Henry Jackman could have been more gripping. The action sequences are very well choreographed, and cinematography by Trent Opaloch is pretty neat. The 3D effects are just alright, nothing spectacular. Editing by Jeffrey Ford could have been sharp. The production values are pretty neat.

Is it worth your time and money??: It’s a decent film, and I liked it better than CA: The First Avenger. While the first film didn’t really establish Captain America as a superhero (not for me at least; he absolutely did nothing in the movie, even the climax fight with Red Skull was so boring!), this film has a lot of potential for him to make his mark, and he does. But for the slow screenplay, it works on every other front. Give it a watch (not necessarily in 3D or IMAX though).

Worth mention: Nick Fury’s car chase sequence. It’s funny though that the roads are absolutely empty and there’s not a single soul in sight when so much is happening.