After hearing and reading raving reviews about this place, I was here finally on a weekday with a couple of friends for dinner. We were guessing the place to be packed, but to our surprise, it was empty, and we were the only guests when we entered. The interiors of the place were very well done, and the ambience was good. There was a band playing in one corner to an empty restaurant. They were good, but very loud, which started to get annoying after a while.

The place boasts of a lavish buffet on the table – they have a fixed menu from which you get a choice of soup, salad, entrée, pizza, main course and a desert for 579 bucks (same for veg and non-veg). Though the amount of food was tempting, the fixed menu was pretty sad, so we instead opted to order from the menu. The menu looked huge, but the choice was very limited. Surprisingly, without any Indian curries on the menu, they had a page full of breads. When enquired, we were told that they a specialty European restaurant. I couldn’t help but laugh. 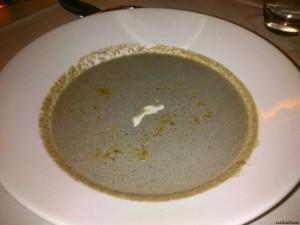 I was kinda excited about the soup, for it said it would be cream of three kinds of mushroom garnished with smoked milk froth, but it turned out to be very different from my expectations; it was too thin and there were not many mushrooms in it. The quantity served was pretty good, but I would have preferred thicker soup in less quantity than what was served. 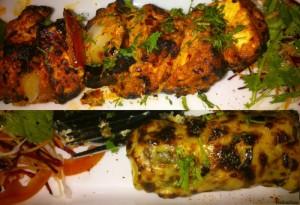 The starters were served pretty soon, and both the vegetarian starters turned out to be good. The paneer was soft, well marinated and grilled. It was a little too spicy, but no complaints for it was supposed to be. The Mushroom Tikka had stuffed mushroom roasted and cooked, and it was yum. My friends Tiger Prawns were a big disappointment thought, for he found them very hard and under-cooked.

It was really tough to order the main course, for there was not much choice. It was either European or Continental, and both had very few vegetarian options. I finally decided to order a pizza and my friend asked for Pan Fried Noodles. My other friend had Grilled Chicken with Pepper sauce. 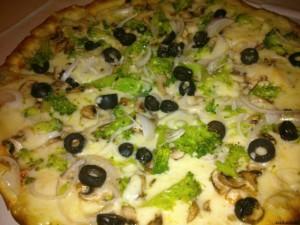 The thin crust pizza was served first. I had asked for Mushrooms, Broccoli, Olives and Jalapeno, but they missed the Jalapeno. The pizza was cheesy (just the way I like it), and the base was crispy. There was no tomato base, but I really didn’t care, for it was very good. On the downside, I thought it was too small for 325 bucks. 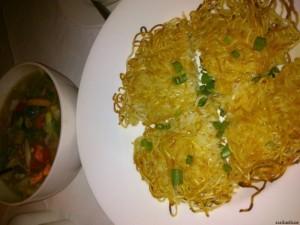 The Pan Fried noodles were served with Vegetable broth which tasted delicious. The vegetables were crunchy, and the sauce was yummy, so altogether, it tasted great with the noodles.

My friend was happy with his Grilled Chicken.

Overall, a decent meal. The fact that there was not much on the menu was a disappointment, but otherwise the food was tasty. The service was decent as well. Though the amount of food we ordered was quite minimal, the bill turned out to be the same as what it would have for the fixed menu. Improving their menu and adding more options to their fixed menu would definitely help them. Give it a shot at your leisure, but don’t expect much.